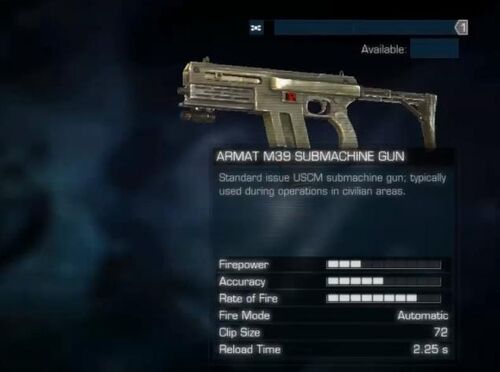 A M39 Submachine Gun is in use by U.S.C.M.s, Civilians and W-Y Personnel on LV426 and Fiorina 'Fury' 161, an automatic weapon with upgradable attachments.

Constructed of alloy and a slightly slower reload and similiar upgradable attachments to other weapons.

Used in combat situations in singleplayer and multiplayer campaigns in Aliens: Colonial Marines.

M39 Submachine Guns are available in all Aliens: Colonial Marines campaigns with their attachments once they are collected or the achievement is accomplished.

In the singleplayer campaign Stasis Interrupted, Hicks and Stone both equip themselves with the grunts M39 Submachine Guns after Hicks is released from stasis and the grunts have been killed. Separately in the Stasis Interrupted campaign a M39 is one of the weapons Lisbeth picks up before splitting from Stone and Turk.

Not only is the weapon used in both single and multiplayer by USCMs and Weyland Personnel but they are used by the WY-Grunts that wear white caps and also a weapon carried by the WY-Elites.

Specification for these weapons are dependent on the weapon's use and vary if using main weapon selection or attachment.

These weapons appeared in promotional clips of gameplay before the game's release used both by players and Weyland-Yutani Personnel.