Joan Lambert is the Navigator aboard the Nostromo in the film Alien.

After the crew emerge from stasis Captain Dallas, Executive Officer Kane, and Navigator Lambert set out to investigate the source of the signal.

Alien (film)
The commercial towing spaceship Nostromo is on a return trip from Thedus to Earth, hauling a refinery and twenty million tons of mineral ore, and carrying its seven-member crew in stasis. Upon receiving a transmission of unknown origin from a nearby planetoid, the ship's computer awakens the crew. Acting on standing orders from their corporate employers, the crew detaches the Nostromo from the refinery and lands on the planetoid, resulting in some damage to the ship. Captain Dallas, Executive Officer Kane, and Navigator Lambert set out to investigate the signal's source while Warrant Officer Ripley, Science Officer Ash, and Engineers Brett and Parker stay behind to monitor their progress and make repairs.

Alien (film)
Lambert's character is played by Veronica Cartwright.
Lambert is killed by the Alien in one of the corridors on the Nostromo.

Cartwright won a Saturn Award for Best Supporting Actress for her performance.

Ivor Powell associate producer along with Ridley Scott thought of the idea of a more industrial vessel for the Nostromo and 'Truckers In Space', a concept of truck drivers journeying on a long route in space, with this idea areas of the Nostromo would have a more used feel and appearance, worn and sparse which also followed though to the crew's uniforms, equipment used aboard the spacecraft and the different levels and areas. 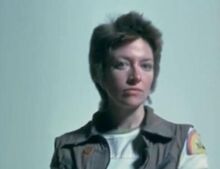 
Lambert's role as navigator had a woman cast with Veronica Cartwright, part of filming required her to be frightened easily, this was necessary from a number of scenes and even as her role of navigator. Other scenes was in medical as the face hugger had detached from Kane, the chest burster scene and as she is confronted by the alien. The filming of the chest burster scene the cast members knew that the creature would be bursting out of Hurt and had seen the chest burster puppet but they had not been told that fake blood would also be bursting out in every direction from high-pressure pumps and squibs.

Lambert was chosen for a role in the film and arrived on set thinking she had the lead role of Ripley, quickly finding she had not the set staff and production crew reassured her that the role of Lambert as a navigator was as important to the film as Ripley's role. She continued, but be it upset of the lower status role, this followed for her role as required by the character.

In the Alien Anthology version of the Alien films and the Weyland-Yutani archives characters were given there full names or screen names different from the film Alien, like Lambert who was called Joan Marie Lambert in her files and was said that she suffered from hyperactivity and nervousness.

With the DLC maps Crew Expendable and Last Survivor for the game Alien: Isolation the characters from the film Alien reappear and some are playable in-game. These are from two scenes from the film; Crew Expendable includes finding the alien and flushing it towards the air lock and Last Survivor includes playing as Ripley and evac from the Nostromo after setting the self-destruct.

Lambert's part is from Crew Expendable after the death of Kane, the group Brett, Ripley, Dallas, Ash and Parker flush the alien towards the airlock. In the film Parker has constructed the four flame throwers as they split into groups and search for the alien, in game they use them along with other equipment and sealing airlocks. Although unplayable Lambert appears along with the rest of the crew, like in the film she is equipped with a flame thrower and splits into a group that goes in search for the alien.

Character detail art and modeling were provided by Jack Perry and Nic Frath, with Calum Watt adding to the character and clothing for each character. Other characters were designed by lead character artist Ranulf Busby and brought to life by lead animator Chris Southall.

Lambert isn't one of the three selectable crew from the DLC Crew Expendable but appears when selecting Parker, Dallas or Ripley. She also appears later as another crew member and appears in the DLC Last Survivor along with Parker but they are both killed by the alien.