LV426 also called 'Acheron' is a lava rock covered planet which features in both the films Alien and Aliens.

LV426 a previously unsurveyed planet before Weyland-Yutani had reached there and established a Colony called Hadley's Hope by 2179. A settlement of 158 colonist, made up of the main Colony buildings which housed the control rooms, command and living quarters, and the Atmosphere Processing buildings and cooling towers.

LV426 was reach by the Nostromo and it's crew in 2122, landing a few kilometers from the source of the signal in the film Alien. On approach Ash the science officer described the conditions on the surface as primordial, continued, and listed the atmospheric condition as consisting mainly of nitrogen, water vapor, carbon dioxide, with trace particles of oxygen and small concentrations of methane and ammonia. During their trek the crew members found the surface conditions wind swept with rough terrain formed by lava flows and basalt rock, later finding the source of the signal, the Derelict spacecraft.

In the film Aliens during a committee meeting hearing, regarding Ripley's testimony and her account of the aliens (which Ripley described in her account as xenomorphs) one of the ECA representatives described LV426 as; "It's a rock, No indigenous life", were as Ripley replied, "Have IQs dropped while I have been away, I just said it wasn't indigenous it had been brought there in some kind of vessel". After feeling she was not being believed, she asked that they send out a spacecraft and search for themselves, were as she was told that they don't need to, as there had been a colony on LV426 for more than 20 years, with 60/70 families. On the surface because of the terraforming, conditions were more favorable as the colony was established with a breathable atmosphere but still not supporting life, dense thick clouds and storms made way for suitable conditions for human life.

LV426 also features as the setting for the games Aliens v Predator Original, Gold and Classic. 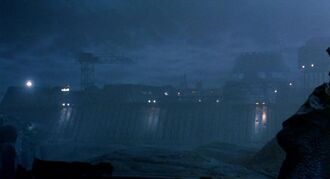 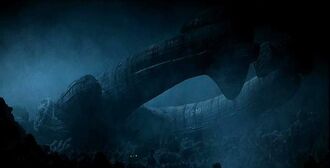 Films
The USCSS Nostromo first sets down on LV426 in the film Alien after having detached from the Refinery Installation landing a few kilometers from the source of the signal which later was found to be emanating from a Derelict spacecraft. Later the Derelict appears in the film Aliens, Newt's family as colonist surveyors discover it and as in Alien bring back a Face Hugger attached on a crew members face. Later and included as a continuing story LV426 features in publications like the Alien book trilogy, starting the story of the colonists and marines stationed at Hadley's Hope in Alien: River of Pain and in the Aliens: Fire and Stone comic series which also link into the film Aliens.

Aliens: Infestation
In your mission all squads are sent to the surface including Delta and Echo which you meet up with at the UPP Compound on the surface, a compound and military installation housing flight bays, hangers, sat comms and a multilevel command center. This area is infested by Gorilla Aliens, so as you progress in is necessary to collect ammo and pick-ups as the aliens, PMCs and combat androids increase in strength and ability.

Once the UPP compound mission and the BP-33 celestial defense guns are destroyed then there is a short journey to the Derelict and Space Jockey inside the Derelict's Orrery which must be killed.

Various
Aliens: Colonial Marines and Aliens: Infestation feature U.S.C.M. arriving on LV426 in the USS Sephora and in the USS Sulaco in the film Aliens, Aliens v Predator Original, Gold and Classic feature the marines already stationed on LV426.

Aliens v Predator 2
The events of the game Aliens v Predator 2 are set 50 years after the destruction of Fiorina 'Fury' 161. Following the flight telemetry from the Derelict spacecraft found on LV426 where the Nostromo crew first encountered the Alien eggs in the film Alien, the Weyland-Yutani Corporation have discovered a planet (LV1201) with the ruins of an extraterrestrial civilization (Space Jockeys) infested with Aliens.

Aliens Online occurs on LV426 in installations not featured in any of the other games like LV-426B and the Derelict Station.

In the Alien Anthology interactive menu LV426 (Acheron) is listed as being 1200kms in diameter with an atmosphere of being part 85% nitrogen, 10% argon, 5% neon and orbiting around Zeta 2 Reticuli. By the establishment of the colony called Hadley's Hope near the Ilium range on the surface the atmospheric conditions were more suitable for humans and contained 158 colonist.

The name 'Acheron' is derived from and called after a feature in the ninth circle, in a book Dante Alighieri’s Hell. James Cameron said in a 1986 interview, 'There never was a name for the planet in the original film, so I made up one. Acheron seemed to be the sort of thing that some sort of colonist who had a literary bent might have named the place.'

The name of the colony on the surface of LV426 is though to refer to one of the founding members. Hadley’s Hope installation being established after the events in the film Alien and before the film Aliens. (Mid 2100 Alien Anthology)

LV426 in an early 'Alien' script was quoted as having a diameter of 120km.

Originally Prometheus (film) was to be set on LV426 (ALIEN: Engineers draft script) around the gas giant Epsilon, on the surface were 24 Alien Temples made from metal and set around the equator.

Prometheus (Project Prometheus)
DISCOVERY OF ACHERON LV-426, MAY 14, 2039 (Project Prometheus)
Weyland astronomers discover multiple moons and a ringed planet just outside the Zeta 2 Reticula System, which are possibly able to support life. Weyland expects to travel there within the century.

Alien Trilogy
LV426 is destroyed in both Playstation and Sega Saturn Alien Trilogy games. Ripley escapes the Derelict and escapes in a Dropship piloted by Bishop. In the Sega Saturn game they then reach the USS Sulaco and Bishop puts Ripley in stasis and her unit is ejected in the Narcissus.

The destruction was probably occurred due to the detonation of the Atmosphere Processor which then destroyed LV426.

Aliens: Colonial Marines
In the game as the crew first reach the surface they find a destroyed Hadley's Hope and on a sign as in the film, indicates that there were 158 colonist. In the earlier level Stasis Interrupted gameplay is played by Stone and Hicks who return to the surface to send a distress signal which reaches the U.S.C.M.s and starts the missions for Winter.

H. Marlow the captain of the Anesidora in the game Alien: Isolation followed the distress signal to LV426 finding both the Derelict and eggs 15 years later.

Because he was arrested and wanted to be released he described his mission setting down on LV426 with his crew Meeks, Heyst, Foster, Lewis and himself. Having set down in the Anesidora they walked towards the signal using a detector, a few difficulties met them along the way but they discovered the Derelict spacecraft and entered inside.

Marlow found the distress beacon and deactivated it then followed into the Derelict's Orrery where the others were. There they had set up a winch and lowered themselves down into the egg chamber, soon after while examining the eggs a face hugger jumped on Foster and infected her.

In game Marlow's team set down on the surface of LV426 and using a tracker follows towards the Derelict. The conditions continue as in the film Alien with surface movement, spacesuits are still required and visiblility is low, the crew still adorn spacesuits similiar with those used in the film Alien and similiar as Amanada wears in her missions.

Alien (film)
The Nostromo's crew first encounter LV426 after having diverted from a return trip from Thedus to Earth. 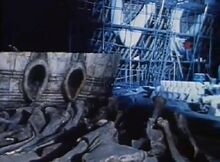 Giger designed and worked on all of the alien aspects of the film, which he designed to appear organic and biomechanical in contrast to the industrial look of the Nostromo and its human element including airbrushing the entire "space jockey" set by hand.

A crew of over 200 workmen and technicians constructed the three principal sets: The surface of the alien planetoid and the interiors of the Nostromo and derelict spacecraft. Art Director Les Dilley created 1/24th scale miniatures of the planetoid's surface and derelict spacecraft based on Giger's designs, then made moulds and casts and scaled them up as diagrams for the wood and fiberglass forms of the sets. Tons of sand, plaster, fiberglass, rock, and gravel were shipped into the studio to sculpt a desert landscape for the planetoid's surface, which the actors would walk across wearing space suit costumes.

Aliens (film)
Sometime after the Nostromo's crew leave LV426 a Weyland-Yutani terraforming colony was established not far from their landing in the film Alien, a colony of about 60-70 families.

A reuse of Giger's designs for the surface were used including models from the film Alien. Brothers Robert and Dennis Skotak were hired to supervise the visual effects for the on set filming, two stages were used to construct the colony on LV426 using miniature models. Cameron used these miniatures and several effects to make scenes look larger than they really were, including rear projection, mirrors, beam splitters, camera splits and foreground miniatures. Filmed on two full sound stages 5-8' high by 40' long, rubbish and ash was used to dress the set which they collected from the ashes of fires on site and a matte backdrop for LV426's atmosphere surrounded the back of the Atmosphere Processing buildings with the scene disappearing into the distance.

In the film Aliens they used the Derelict model from the film Alien which needed to be repaired, in addition to the 7' model a smaller 3' model with scaled surface and model ATV was used as minimal filming on the Derelict occurred. A part made breach in the side of the Derelict was built as Newt's mother and father entered the spacecraft then retuning to the full sized ATV on the surface.

At Hadley's Hope a separate area as the crew entered from the North Hold as they searched for life signs before setting up in Operations was created. This area also had a matte backdrop for the atmosphere and surrounding rocks and full size wind deflectors. Wind, smoke and rain was used when filming, blending with the backdrop, large set fans, smoke machines and sprinklers created these effects.

2-3 feet long models were constructed for the UD4L Cheyenne and APC in and around the Atmosphere Processor and Hadley's Hope, with the colony buildings being constructed about 4' high by 25' long with similiar sized ATVs and other movement vehicles and machinery.

For the clouds cotton wool was used in filming as the crew approached in the UD4L Cheyenne and as they escaped, included on approach a separate cockpit for the dropship was made so as filming could be achieved. The blast from the detonation of the Atmosphere Processor was produced by raising a light under the cotton wool as the dropship model was filmed escaping, this giving the appearing of a nuclear explosion.

The games Aliens: Infestation and Aliens: Colonial Marines features LV426 in 2179 with the other games appearing on LV426 in and about the same time as the films.