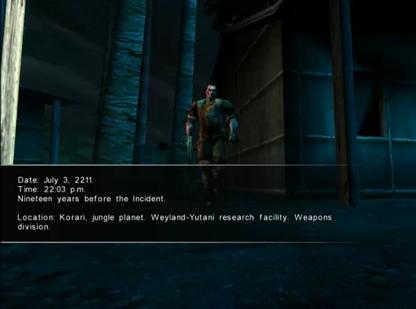 Korari is a jungle planet in the game Aliens v Predator 2 and Weyland-Yutani's research facility weapons division. It is the starting location for a predator in singleplayer and the location of one of Weyland-Yutani's first colonies, an early research camp controlled by Corporal Rykov. In gameplay a predator attacks Rykov, and failing to kill him, follows him and after a 19 year trek finds Rykov on LV1201 in the year 2230.

Aliens v Predator 2
In November 2211, a Predator arrived on Korari, one of Weyland-Yutani's first colonies, and discovered an early Weyland-Yutani research camp there. He stalked the marines stationed there, killing many of them and skinning them alive. The last marine, Corporal Rykov, tried to escape the camp, but the Predator shot him with a plasma burst in the back, causing him to fall several stories below and heavily damaging his spine, paralyzing both legs. However, Rykov survived the injuries, crawled back to the base, and was evacuated by the medical team and returned to Earth for medical treatment.

In December 2230, 19 years after the events, and about 6 days after the incident in the POC, the lone Predator, ranked an Elite, arrives on LV1201 with two clan members for a hunt, but their ship is noticed by Rykov himself, now a mercenary general and private defense contractor for the Iron Bears, with a hatred for Predators.

Aliens v Predator 2
Korari is the start for Prince's missions.