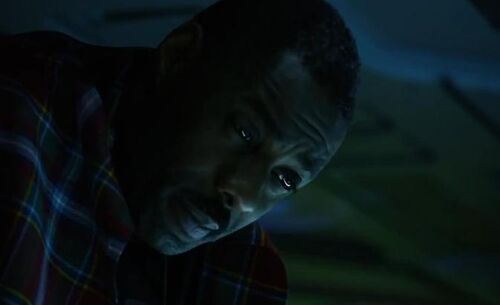 Janek is the Captain aboard ship in the film Prometheus.

Janek like the rest of the crew is under control by Vickers, his role is that of landing the craft and the crew's safety while on LV223. 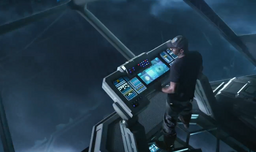 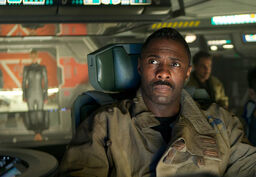 Once approaching LV223, Janek as the Captain takes control of Prometheus with help from Ravel a pilot and Chance the navigator.

Janek is like Vickers, which means he mostly remains aboard Prometheus working with Vickers planning and directing the crew whilst at the Alien Temple. During their first night on LV223, Vickers and Janek are on the Bridge tracking crew members Millburn and Fifield and following the Spectagraphs, they later spend the night together.

Janek goes along with the crew on their second journey to collect Millburn and Fifield from the Alien Temple, during this Holloway's infection progresses and he is helped back aboard the RT01 cutting their journey short, he is then at the Cargo Bay when Vickers burns a mutating Holloway.

Later an infected and mutated Fifield returns aboard Prometheus killing Ray, Wallace and Taplow, Fifield is shot a number of times by Vladimir and Jackson, before Janek and Chance noticing what is occurring in the Cargo Bay rush there burning a mutated Fifield to death.


Janek later theorizes that the planet was used as an Engineer's military base until they lost control of their biological weapons, while discussing with Shaw and they agree then that the Terraformer with the Derelict and it's contents shouldn't reach Earth.

Later when Shaw as the only survivor returns, Vickers orders Janek to return to Earth, but Shaw convinces him to stop the Engineer. With help from Ravel and Chance, they use their craft to impact with the Derelict destroying Prometheus and killing all the remaining crew aboard.

Prometheus (film)
Captain Janek's character is played by Idris Elba aboard Prometheus.
Janek, Chance, Ravel and the rest of the crew die in the impact with the Derelict while Vickers escapes in an Ejection Pod.