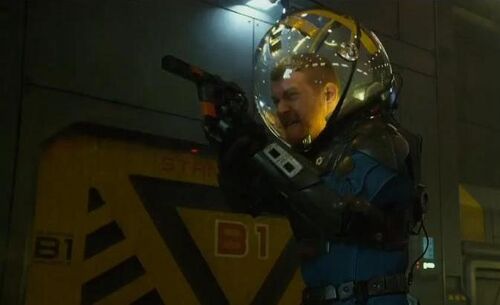 Jackson is a mercenary aboard ship in the film Prometheus.

Mercenaries are required on Prometheus' voyage to LV223 due to the importance of the voyage. They are equipped with Storm Rifles, Pistols, Shotguns and Flame Throwers.

Mercenaries aboard Prometheus are Vladimir, Jackson, Sheppard and Taplow. 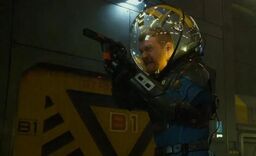 Jackson accompanies the scientists on most journeys into the Alien Temple.

After Fifield returns and starts attacking the crew, Jackson and Vladimir rush into the Cargo Bay, firing at a mutated Fifield causing little effect Jackson takes cover into the back of the RT01 while Vladimir is attacked and killed. When Janek and Chance arrive moments later they control the situation with Flame throwers.

On their last journey along with Weyland, David, Ford and Shaw they awaken a Terraformer from it's stasis. Once awakened the Terraformer sets about killing them, Jackson tries shooting the Terraformer with a Shotgun but to no avail, they are all killed except Shaw who escapes and returns to warn the crew of Prometheus.


Jackson dies from an attack by a Terraformer in the Orrey of the Derelict.