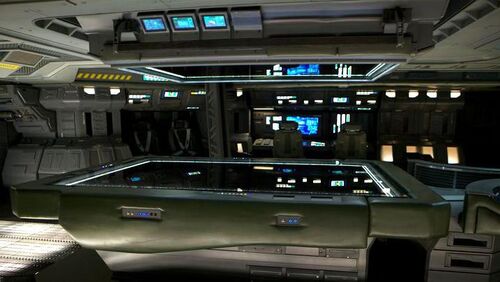 Holotab Display Unit is used on the Bridge aboard the Prometheus in the film Prometheus.

Constructed of transparent polymer composite with a graphene core. Break-resistant up to 3000 megapascals. Can project its data content onto any surface. Its sensors receive, process and send data streams at FTT (Faster-Than-Thought) speeds, roughly 37 GHz, from anywhere in the planetary range, control units are situated on the side of the floor and ceiling units leaving the surface to display a 2D or hologramatic image, similiar to a 2D tactical display.

A Holotab Display Unit can display virtually any tactical information either in 2D or 3D, these can be buildings, terrain and spacecrafts.
Used for military strategic planning to send orders to and from any soldier stationed anywhere within planetary range. Also used to calculate FTL navigational coordinates on Heliades vessels. Scientists can scan and collect data with HoloTab’s built-in Spectrawave function. For personal use, HoloTab allows citizens to program all household systems and appliances remotely while away from home. HoloTab can access the global knowledge center and display information in crystal clear holography.

David and Vickers make use of the Holotab Display Units, collating spectagraph data and displaying it on the unit. When the spectagraphs are deployed they set about mapping the whole of the Alien Temple. These units can also display messages and other data including images, video files and video links.

Holotab Display Units are available in the following;
2D or 3D visualization.

Julian Caldow, Ben Proctor and Andrew Palmer designed the concepts for the different areas of Prometheus which were varied by production but kept their basic design from the USCSS Megellan and for the doors, corridors and labs. 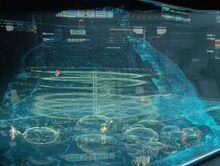 The Prometheus' bridge was built on a stage at Pinewood studios with a green screen backdrop, the cargo bay, airlock and one landing foot were built on the Pinewood backlot surrounded by a huge 60ft high circular green screen backed by shipping containers. The surface and walls were blended from different filming and added to the filming in Iceland for the spacecraft on the surface.

Fuel VFX generated the spectagraphs and the laser effects for filming on set and generated the Holotab display of the detected signals that were relayed to the bridge.