A Holo Map is a star map navigation system which is part of the Orrey inside the Derelict. A pilot's seat and four Sarcophaguses make up the Orrey, the controls are situated to the side of a raised area which are all part of the large pilots chamber.
The star map displays a hologramatic image of the solar systems around Earth, LV426, Planetoid and LV223, a selection can be made by selecting a planet and by doing so will set the Derelicts' course.

Once a destination has been made the Holo Map disappears and a pilot's seat and cannon mechanism rises from beneath the floor, once seated the chair becomes part of the Terraformers space suit and as these form around the wearer the destination appears again.

Holo Map displays a hologramatic representation of the chartered space system forming part of the navigational system of the Derelict.

A Holo Map is used for setting a course to Earth.

Holo Maps are available in the following;
When David journeys into the Derelict's Orrey he is capable of switching on the Holo Map, and as he becomes interested interacts particularly with Earth.

Various
A Holo Map doesn't feature in the films Alien and Aliens aboard the Derelict.

Prometheus (film)
Used aboard the Derelict in Prometheus (film), these star maps are as large as the Pilot's Chamber and can be zoomed in and out to display an area in more detail.
David is able to deuce that the Terraformers set a course for Earth before they were killed by a pathogen.
A Holo Map reappears when a Terraformer is seated and his biomechanical spacesuit starts morphing around him. 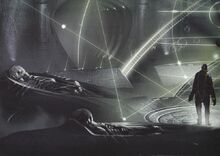 Alex Kozhanov, Ben Proctor, Julian Caldow and Steve Messing were the concept artist for the film, working on set design for the Derelict, drawing on influences from H.R.Giger's, Ron Cobbs' and Chris Foss' designs from Alien which themselves were carried through into Aliens. Alex Kozhanov and Matt Middleton at MPC digitized the concepts with Caroline Delen adding the textures which they then used as reference to built the sets.

A 'deep image' toolset was used by Fuel VFX to successfully allow artists to adjust and manipulate specific areas of the Orrery in isolation. This negated the need to redo expensive complete renders when minor changes were requested.