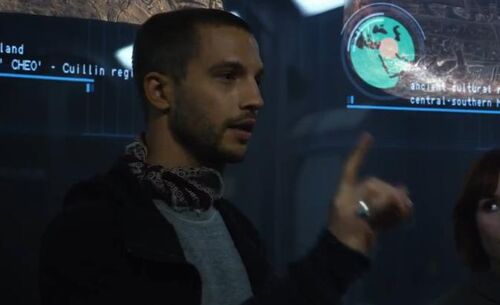 Holloway is Charlie Holloway an Archaeologist aboard ship in the film Prometheus.

Holloway is with Shaw and other archaeologists when the Engineers' pictorials representations of star maps are found, these they later display to the selected crew for Prometheus' Mission using a WMCD presentation. 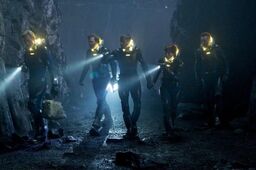 On landing on LV223, Holloway is amongst the group that go to explore the Alien Temple, there they activate a Holo integrated message, by David deciphering text written on a wall which explained multiple corpses in the Temple.

After this they split into two groups, Millburn and Fifield going in one direction and the others following a Holo integrated message, after they have explored the Temple and it's Chambers they find a Terraformer's Biomask. A storm moves in quickly causing them to return as quickly as possible cutting their exploration early.

Later that day Holloway is infected by liquid from an Urn given by David as they share a drink together in the Mess Hall. The liquid immediately starts having a small but definite effect on Holloway. He later confides with Shaw, and passes on a part of the alien DNA, this DNA also has an effect on Shaw.

Their next journey into the Alien Temple causes a progression of Holloway's infection, he falls ill and is helped back by Janek, as they return aboard Prometheus.
On return Vickers who has been keeping aware of the crew, refuses to allow Holloway back aboard, which she thinks could risk a spread of the infection and because of this and Holloway's request burns him with a Flame thrower.

Holloway states that LV223 is the only system around Zeta 2 Reticuli.