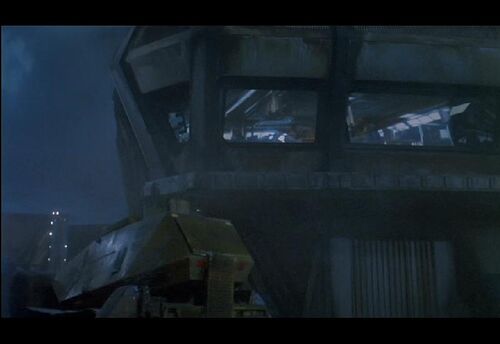 Not far from Hadley's Hope was the location of the Space Jockey's ship which had crash landed and had been discovered containing xenomorphs and eggs. According to Weyland-Yutani surveys, 'it was simply a dead rock'.


After the detonation of the Hadley's Hope atmosphere processing station reactor, the entire area was destroyed. The wrecked site features in the game Aliens: Colonial Marines.

Various
The Aliens v Predator (Original, Gold and Classic) and Aliens: Colonial Marines campaigns include Hadley's Hope and the surface of LV426.

Various
Aliens: Colonial Marines and Aliens: Infestation features U.S.C.M.s arriving on LV426 in the USS Sephora and in the USS Sulaco in the film Aliens, Aliens v Predator Original, Gold and Classic features the marines already stationed on LV426.

Aliens: Colonial Marines
In the level No Hope in Hadley's a sign as the team approach says that their are 158 colonist, the same as in the film. As they approach a number of EEVs and an APC litter the area.

The levels in the DLC 'Bug Hunt' like Tribute and Mercenary feature Hadley's Hope installation intact.

Hadley’s Hope
This is the configuration for Hadley’s Hope from the game Aliens: Colonial Marines, it could suggest there is a similiar format in other games and the film Aliens which the game is from.

Aliens (film)
In the film Aliens the crew of the USS Sulaco set down on LV426 in a UD4L Cheyenne and enter Hadley's Hope via the living quarters area.

The colony on LV-426 is named Hadley's Hope, with a population of 158. This is revealed in the special edition with the saying "Have A Nice Day" painted on the sign.

Mostly designed by Ron Cobb, areas of the installation included the buildings airlocks, command, corridors, stairways, laboratories, installation's buildings, bar and casino, uplinks and Atmosphere Processor building. Ron Cobb draw on ideas of installations on a moon but also using the idea that parts were constructed in units and bolted together when being constructed.

Brothers Robert and Dennis Skotak were hired to supervise the visual effects having previously worked with Cameron on several Roger Corman movies. Two stages were used to construct the colony on LV-426 using miniature models. Cameron used these miniatures and several effects to make scenes look larger than they really were, including rear projection, mirrors, beam splitters, camera splits and foreground miniatures.

Model miniatures were filmed on two full sound stages 5-8' high by 40' long, rubbish and ash was used to dress the set and a matte backdrop for the atmosphere appeared behind the processing station.

Filming was at Pinewood Studios for model miniatures with production lasting for ten months and unlike Alien only small models for the surface of LV426, Derelict and Hadley's Hope were used. Scaled fiberglass model for the landscape of the planetoid's surface was filmed at various angles for wide and near shots mostly as miniatures.

2-3 feet long models were constructed for the UD4L Cheyenne and APC in and around the Atmosphere Processor and Hadley's Hope installation with the buildings constructed on set being about 4' high by 25' long with similiar proportions for all the ATVs.

In filming with the crew the full size APC was used, at the entrance as the squad first enter the installation, as Ripley takes the APC collecting the surviving crew, here filming the Alien and the crew entering, as they run down the Aliens, production crew used silicon models which could be positioned in set ways that no cables or controls would be necessary these could then be exploded for effect. Other Atmosphere Processor building filming occurred at a power station in London.

Cotton wool was used for the clouds as the crew approached and as they escaped, including the detonation of the Atmosphere Processor which was produced by raising a light under the cotton wool appearing as a nuclear explosion.

Construction of the installation's corridors were mainly from wood frames and plastic floor and wall tiles. These were then painted with gloss paint and stickers added, made to appear as if made from metal, metal sound FX were added in post production for the floors. Wiring was fitted in along the ceiling which was later redressed in the battle scene and marines search scene as they entered the colony.

Command, laboratories and research were also mainly made from wood frames and plastic floor and wall tiles. These then dressed to appear as if metal, glass or plastic finish and also as if constructed on site from prefab units. Lights, terminals and switches were used in Command with pre designed complex and Atmosphere Processor building plans placed on 2D display panels which were back lit, plans would be varied in cut scenes. The use of vending machine parts and old tape spool units gave the impression of a mainframe, wallpaper would be used for walls and ceilings were plastic panels wouldn't be that necessary.