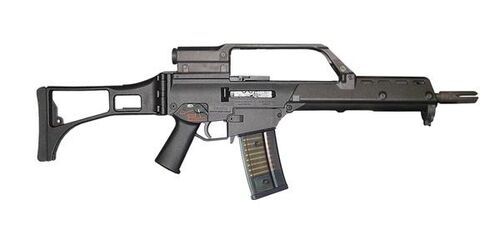 HK G36 is an assault rifle used by Weyland Personnel, marines and civilians.

Made from alloy, steel and carbon fiber-reinforced polyamide, a HK G36 is semi/fully automatic and can be equipped with dual optical or single telescopic sight.

The HK G36 has been used in the film Alien v Predator fitted with green laser markers.

HK G36s are available in the following;
Used by mercenaries in the film Alien v Predator for use against any enemies, these weapons were configured inside brief cases and the scopes appeared as handles. As the walls of the underground Pyramid began shifting and reconfiguring the group of mercenaries carrying HK G36s opened their cases exposing that they were just a cover for the weapons.