Grid is a Alien on Earth from Alien v Predator (film).

Hatched from an Alien Egg in the underground Pyramid beneath the Whaling Station Antarctica, who later leads the other Aliens against the explorers and Predators. He receives a net marking from a net gun and hence his name 'Grid'.

A standard Alien with cross net markings on skull.

Alien v Predator (film)
Grid dies when the ice callapses on the Pyramid killing it and the other Aliens in the film Alien v Predator.
Grid obtains his cross net markings from a net of a Net Gun.

Tom Woodruff, Jr. played as the Alien, the other titular species of the film. Several Aliens attack the humans and Predators within the Pyramid. The Alien played by Woodruff is listed in the film's credits as "Grid", after a grid-like wound received during the film.

The few alterations introduced for the Alien Warriors in the film were a new back appendage and colour. Because director Paul W. S. Anderson feared the existing style of the Warrior hands might appear a bit weak up against Predators, he wanted the them to be beefed up a little, pre-visually manipulated digitally using Photoshop, sculptures hands were then altered accordingly. Photoshop concept art was created by Chris Ayers who also designed Grid. 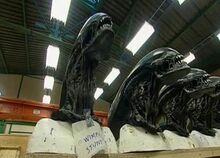 Tom Woodruff, Jr. again played as the lead Alien listed in the film's credits as Grid, after a grid-like wound received during the film. Like for predators, aliens like Grid had a number of different casts made for the different effects, including a head were blood and smoke would emerge when caught in a net. For some of the animated aliens a foam skin would be glued to the metal cables running across the lip area which could also be radio controlled.

In MPC's soho, London studio, accurate computer models and matching textures were painstakingly built for both the Aliens and Predators in order to exactly match those of their live-action counterparts with Framestore CFC creating models and matte paintings of the surface, underground Pyramid and spacecrafts.

A hydraulic Alien puppet was created so ADI would be able to make movements faster and give the Alien a slimline and skeletal appearance, rather than using an actor in a suit. The puppet required six people to run it, three for the head and body, two for the arms, and a sixth to make sure the signals were reaching the computer. Movements were recorded in the computer so that puppeteers would be able to repeat moves that Anderson liked. The puppet was used in six shots, including the first fight scene with a Predator which took one month to film, this was filmed using both hydraulically and animatronic Alien and an actor in a suit. MPC effects animators provided the final ingredients in the film including steaming blood, alien saliva, explosive debris and swirling snow storms. For these scenes, MPC's artists created entire environments, and utilized an extended version of MPC's proprietary crowd software "ALICE" (created for the studio's work on Warner Brothers 'Troy') to create a swarm of over 16,000 squirming alien warriors.

Post production effects in film achieved by CGI were by Cinesite and Universal Production Partners.