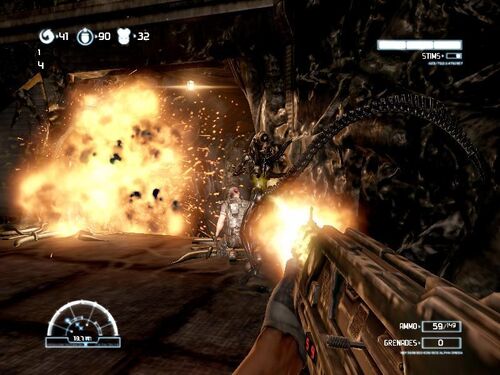 Grenades are in service with the U.S.C.M.s.

Grenades are available in many capacities, on BG386 they are standard 'high explosive' (HE), and are fired from an under barrel Grenade Launcher fitted to the standard issue M41A/2 Pulse Rifle, although available for all other Pulse Rifles. In this configuration the grenades are primed for impact detonation, allowing for a 'fire and forget' setting, these will also detonate if a marine is near to the fired explosive, an alternative is timed detonation allowing a short time before exploding.

Grenades are constructed from an alloy casing, which hold the HE inside. These are primed for impact or timed detonation, as well as allowing for other configurations. All models Pulse Rifles from M41 Pulse Rifles to M41A/2 Pulse Rifles are equipped and configured to carry and fire Grenades from an under barrel breach, this version of 40mm grenade is also used in the M16 and the MGL Grenade Launcher which can also be equipped with fragmentation and proximity grenades.

In Aliens Armageddon and Aliens Extermination Flame Canisters are used, these as similiar with grenades and pipe bombs. The number carried for a marine is indicated on screen.

Aliens (film)
Grenades appear in Aliens (film) for the Pulse Rifle and impact and timed grenades are used, notably by Gorman and Vasquez in the air ducts as they flee and are cornered by Aliens and by Ripley after finding the Alien Queen and her Lair full of alien eggs.

Aliens: Infestation
In the game marines use M235 offensive grenades once collected, these are used for clearing any debris or for killing aliens aboard the Sulaco and are vital in gameplay.