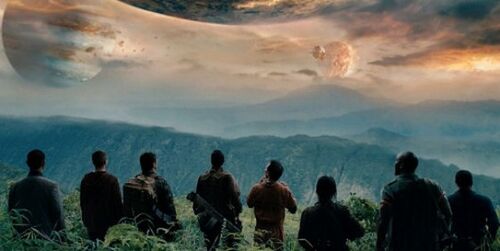 The Game Reserve is an tropical, forest covered planet. The Game Preserve planet features in the film 'Predators 2010' as the location a group of killers must endeavour the alien race of Predators that have set out to target them as prey. Air dropped on the surface by parachute, the group Cuchillo, Nikolai, Edwin, Hanzo, Isabelle, Mombasa, Royce and Stans meet up and make their way towards higher ground, only finding that they are on a planet other then Earth.

Predators (film)
A new group of Predators called Classic, Tracker, Falconer and Berserker battle for supremacy in the Game Reserve. As they gain supremacy the Classic is captured and crucified in the Predator Camp as a show of strength, later released by Royce as a way of escaping from the Game Reserve and in turn the Classic goes onto battle against the Berserker, the last remaining predator of the clan.

Predators
The game Predators involves a player playing as a Predator against both Predators and humans.

Predators (film)
An unnamed planet, the 'Game Reserve' is the setting which a group of Predators choose to battle against a select group of humans, in the film Predators.

As Fox wanted the film set in a jungle, Robert Rodriguez's idea as a writer was to set it on another planet including a jungle location and therefore not confusing it from the earlier Predator film. The writers Alex Litvak and Michael Finch then completed the story as a distant planet similiar to Earth where Predators battled prey to the death, adding the characters both human, alien and predator.

Filming included both steadicams and crane cams with tracking cameras suspended on cables which could be used for the tracking and following shots.

Most filming for the film was produced on set at Troublemaker Studios and Canyon Lake, Texas, USA, with the rest in Texas and around Kolekole Forest Reserve, Hawaii. Some filming of the forest undergrowth and trees including Edwin trapping the alien and as Noland appeared was filmed in a Texas forest, doubling for shooting in Hawaii.

Bastrop, Texas saw some filming of the scenes as the group tracked through the forest with other scenes and background footage from Kolekole Forest Reserve, Hawaii.

The Canyon Lake, Texas for the rock surface and small waterfall, this was the location where the group stopped and rested and Isabelle spoke to Royce.

Filming of the Predator Camp and Subterranean Drill was created at the Troublemaker Studios, Texas.

Kolekole Forest Reserve, Hawaii (Hilo) for the tree canopy and waterfall filming and for the drone flight and as the group approached the camp.

Mauna Kea, Hawaii for skyline and as the group approach and exit the Subterranean Drill as the survivors from the Predators attack.

In post production, sky and and planetary bodies were added which also included blending in a new mountain range and horizon, shots that were completed digitally using a number of passes.

Like for the Predator Camp, Hybride Technologies VFX added the visual effects that included blending background shots to screen footage with added foliage giving the appearance of a denser forested area, in some areas items on screen were manipulated and resized and shaped digitally and appeared in different locations than in filming.

Predators
Unlike the film Predators 2010 game play in Predators is played as a Predator against Stans, Cuchillo, Isabelle, Royce, Tracker, Falconer and the Berserker.

The film Predators is set on the Game Reserve planet, the Tracker, Falconer and Berserker bring prey from different planets for hunting, the group that was parachuted in that included Royce were from Earth in the early 21st century.