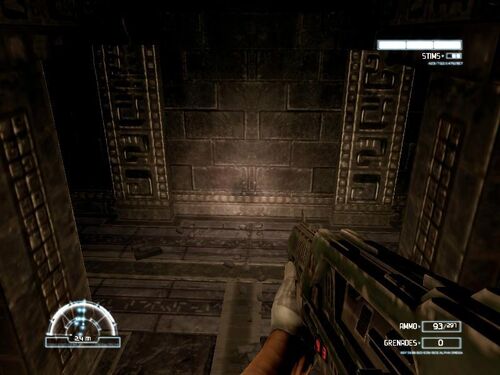 Flashlights are part of a Marine's armoury.

Made from a synthetic alloy, a Flashlight is designed to be attached to weapons, shoulders or helmets, these would be bright enough to illuminate an area infront of the wearer of 10-20m .

Various
Most Colonial Marines in both games and films are equipped with flashlights either attached to their armour or helmets.

Alien (film)
Flashlights are equipped on the crew's spacesuits as they investigate the Derelict, the crew also carry flashlights aboard the Nostromo and Derelict.

Aliens (film)
USCMs were equipped with shoulder mounted flashlights as most USCMs.

Alien 3 (film)
Of the few items the inmates have are flare like torches, used for lighting but also capable of starting fires. The use these to light the corridors, for set off the flammable liquid and as torches.

Alien Resurrection (film)
The shock rifle and flame throwers are equipped with torches.

Predator 2 (film)
Few of Mike Harrigan's weapons and the weapons of the LA police and DEA were equipped with flashlights.

The expedition were equipped with powerful flashlights as they searched about the Whaling Station and underground Pyramid.

Aliens v Predator: Requiem (film)
Multiple flashlights are used in the film, by either the town's residents or military personnel.

Predators (film)
Royce's gun is the only weapon equipped with an attached light in the film. Used mostly in the Subterranean Drill along with flares.

Prometheus (film)
Like in the film Alien, the crew's spacesuits were equipped with lights, they also carried flashlights with three bulbs. Props and replicas showed that the torches used ultra-bright LEDs.

Lighting inside helmets allowed the actors to be lit in low light levels preventing dazzle from studio lighting when filming. The small carried flashlights on-set weren't very bright and seldom lit the area, the larger ones proved more effective when used in the Alien Temple.

As well as real torches used, production crew made use of dummy torches, these were set props and were carried on the belts of the crew’s EVA suits as they ventured from USCSS Prometheus. Made from a resin and painted, matching the real ones, these items had no parts but would be substituted for real torches in close up shots and when not in use.

The actual film set unit is available for purchase from Prop Store, with the actual light units available from purchase awhile ago.

Alien: Isolation
With the increased capability of programming and lighting used in the game, torches used by the crew replica the beam of a powerful flashlight.