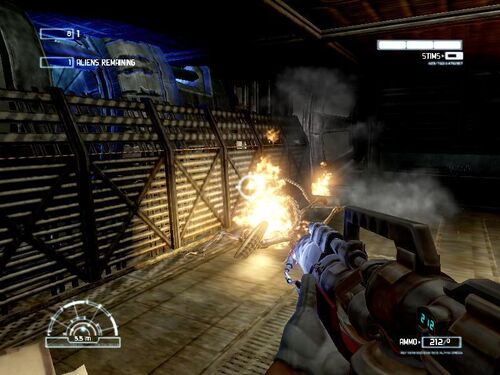 While the M260B Flame thrower is in service with the U.S.C.M. on BG386 a M240 Flame thrower has been in use on both LV426 and LV1201. In all variations the flame thrower uses propane gas as ammunition, this allows for the device to be light weight but reduces the range, M260B and M240 Flame throwers are limited to an effective range of between 5m - 10m.

Constructed of alloy, gas is feed from a replaceable under weapon reserve tank which fits quickly in position. A digital unit reserve is positioned to the side of the M260B and M240 Flame throwers informing the user of the reserve gas supply.

A weapon useful for combat in situations where there are narrows corridors, airducts, rooms and walkways.

Flame throwers are available in the following;
Aliens: Colonial Marines
M240 Flame throwers can be collected at various locations including aboard the Sulaco and on the surface of LV426, these are not upgradable but have similiar capabilities as the Flame thrower in the film Aliens.

Frost's Flame thrower can also be collected through the level Derelict Reclaimed.

Alien Resurrection (film)
In the film Ripley picks up Elgyn's rifle after finding him dead and continues carrying it until they reach room 7 aboard the Auriga were she is given the flame thrower incinerating the different Ripley clone versions.

Alien (film)
After a Chest Burster emerged from Kane and grew into an adult drone, the crew found that the cattle prods aboard the Nostromo wouldn't be effective against the creature. So Dallas asked Parker to construct four Flame throwers, Dallas, Parker, Lambert and Ripley used them to flush the Alien out from the corridors, air ducts and rooms. Parker also used it on Ash as he attacked and tried to kill Ripley and Ripley used on Dallas and Brett when she found them cocooned in the lower levels.

Although the flame throwers in the film were said to be constructed as needed the used components were from parts available aboard the Nostromo.

Measuring 31 ½" long and weighing 17 pounds, the flame thrower was constructed of steel, aluminum, industrial plastic, brass, wood and resin. Painted in a dull white and distressed to appear as if was heavily used in an industrial environment. Exposed metal on the fuel tank valves, solid aluminum grips and flame emitter added to the effect. (From one of the original flame throwers sold at auction.) Other than an on off flow valve and a pilot flame, there are no physical controls or adjustments, the flame thrower produced a constant and steady pilot flame for realistic on-set shots. A different version, with hose attachments to a much larger gas supply, was used for the full flame and burning scenes.

Aliens (film)
The weapons used by the USCMS were constructed from real fully functional weapons. Armourers used guns they found to be the most reliable when firing blanks and those which looked futuristic. Pulse Rifles were created from a Thompson SMG with an attached forend off a Franchi SPAS-12 shotgun and a Remington 12 Gauge Model 870P receiver with barrel. The Smart Guns carried by Vasquez and Drake were designed around a German MG-42 machine gun and were maneuvered with a steadicam-like harness and made from parts from old motorcycles. The crew found that the flamethrowers were the most difficult weapon to create and use as they were the heaviest and most dangerous.

In filming Ripley straps a pulse rifle to one of these flamethrowers before returning to the atmosphere processor on LV-426, hoping to find Newt still alive, this weapon wasn't named on set but later was called Ripley's Flame Thrower. Butane gas was used as the fuel as it had most control for the users and crew and was the easiest extinguished.

There were a number of different Flame thrower versions made for filming, each were used for a particular role on set. Like other weapons the flame unit used existing weapons that were modified and reconstructed, the flame thrower being two M16’s moulded and spliced together, cut into two parts, using the scope/handle facing forward, but with the ejection port turned backwards.

Parts used for the handle and receiver, with the front section made from a 203 grenade launcher frame painted green, some units featured a small blue pilot flame which was powered by a gas canister inside the main housing.

In filming these real flame thrower units were used both by Frost, Apone and Ripley, along with the gas, production crew would set alight areas of the set at the same time as the cast opened fire. When filming stopped the flames could be distinguished quickly, this technique was particularly used in the Queen's chamber inside the Atmosphere Processor.

In Alien Resurrection (film) the Shock Rifle is either equipped with a taser or flashlight and the Flamer thrower is equipped with an under barrel flashlight and can fire either as a Grenade Launcher, Pulse Rifle or Flame thrower from the same barrel. These weapons are both similiar in design, in the game other weapons like the Flame throwers are similiar as in the film but the Pulse Rifles, Grenade Launchers, and Rocket Launchers are separate and are similiar with weapons appearing in other games.

Prometheus (film)
Flame throwers are used aboard USCSS Prometheus both by crew and mercenaries in the film Prometheus.

In Aliens Predator Collectable Card Game the flame thrower is called a Draco Double Burner with the skock rifle called a Lacrima 99.

The unit can be collected in a few locations about the space station in the game and is collected immediately in the DLC Crew Expendable and Last Survivor.

Similarities from the film; the flame thrower features all the parts as used in the film Alien, the canisters for oxygen are white and red for fuel which is the only part collected in gameplay and the main body of the unit is silver in colour. The flame thrower fuel is referred to as a fuel canister or gel, fuel canisters have butane written on them following from the film.

Differences from the film; Amanda or the other characters don't use the shoulder strap.

There are multiple locations were a Flame thrower can be collected, these include aboard the Sulaco, in Hadley's Hope and Weyland-Yutani Facilty.

Aliens: Infestation
Flame throwers are available for players once collected and are effective against all enemies.

Alien: The Weyland-Yutani Report
The Flame thrower appears in the book with the description of the M240 Incinerator Unit from the film Aliens;

'This exceptionally designed weapon should be modified when facing Xenomorphs. The pressure-thickened napthal accelerant is designed to adhere to any surface it touches and to burn slowly, creating as much damage and smoke as possible. We strongly feel that the effectiveness of fire against the Xenomorph is more psychological/instinctual than physical. Reports from Fiorina 161 state that, after being immersed in molten lead, the Xenomorph was able to continue fighting - this indicates a significant resistance to heat.

We recommend a petroleum-based fuel rather than napthal, refined so that it burns hot, clean and quickly. The heat should be enough to keep Xenomorphs at bay and burn facehuggers outright with a minimum of smoke interference. Long buring fuels risk the structural integrity of any flammable environment.'