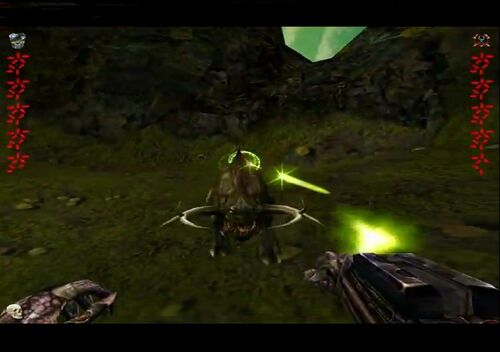 Energy Flechettes are part of a Predator's armoury.

The energy flechette is a plasma energy bolt firing gauntlet used on LV1201 by Predators in the game Aliens v Predator 2. Similiar with the gauntlets appearing in the film Predator 2, energy flechettes attach like the wrist communicator on the right arm and have a single shot or rapid fire action.

Made from ploy-synthetic alloy, the unit attaches on the wrist and is powered by plasma energy.

Once armed with the Energy Flechette a predator can use it as plasma pistol.

Energy Flechettes are available in the following;
Only available for Predators in the game Aliens v Predator 2: Primal Hunt for the levels Legend, Stasis and Honor and Death.