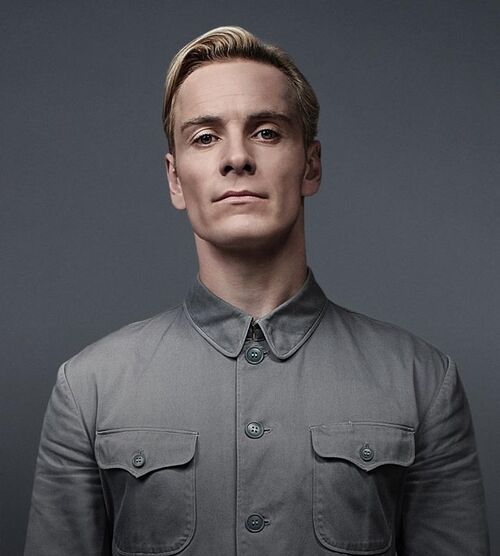 David is a synthetic and Science Officer aboard the spacecraft Prometheus in the film Prometheus.

David is referred to as 'David 8', an 8 series synthetic indistinguishable from a human. Made by Weyland, David's index finger has the Weyland corporation mark logo, this is for recognition and access purposes.

Appearances in the following;
Prometheus (film).

David 8 can be programmed to enter a default neutral state, devoid of emotional engagement. In this state, David 8 reacts to his surroundings using only his logic actuators and does not access his facial mapping sensors or other advanced emotion-response pathways. His Motivation Sequences are bypassed in favor of a simplified rational response. This state can be useful for applications where traditional non-feeling cybernetic behavior is required.

When David 8's sensors detect rage or anger in the voices and expressions of his human counterparts, he can instantly simulate anger (akin to irritation), primarily for the purpose of expressing sympathy with that human’s emotional state. However, David himself will resist anger toward humans unless the display of that emotion is absolutely vital in reaching a pre-programmed goal.

Designed to exhibit poise and natural-looking composure, David 8 expresses effortless confidence in his physicality. Additionally, his data processors constantly return flawless logic in every situation. Since logic is a strong basis for human confidence and conviction, David 8 easily assumes these emotions. The ability to convey a healthy confidence is a vital tool in David 8's considerable arsenal of emotional skills.

Difficult to control in humans, disgust was one of the most challenging emotions for David 8 to learn. Naturally mannerly and gracious, David 8’s programmers were forced to design micro-deviations in his synthetic “neural” pathways to disrupt this standard state. Now, David 8 can recognize and respond with a perfect facsimile of contempt to any situation that he finds particularly loathsome, boring or disdainful.

David 8 shares in human-like joy in his own unique way. In humans, the mere physical expression of joy (raising eyebrows, turning mouth corners up, etc.) can actually generate the emotion of joy itself. David 8 experiences joy in much the same way. His micro-articulating facial muscles form a perfectly jubilant expression in reaction to an enjoyable situation.

David 8 has been programmed to experience grief and sadness through a complex series of neural functions that can simulate a perceived memory. This allows David 8 to relate to humans in a way that no previous model could. Many things make David 8 sad, and with his highly attuned sensors and new fluid release unit, David 8 will actually cry in very emotional or sorrowful situations.

The ability to wonder and look at the world in new ways is truly a pure and essential element of being human. David 8's inquisitivity algorithms, like the retooled Motivator Sequence, create eagerness and generate questions such as “How can I relate to this human?” or “How can I improve this workplace situation?” Curiosity allows David 8 to conduct focused and intense investigation into solving problems that can alleviate human

David 8 trusts his human programmers implicitly. In order for David 8 to be successful in your home or office, however, he must be trustworthy as well. Trust is a complex human emotion that David 8 garners through ultraprecise verbal cues, pupil dilation and controlled facial movement, inviting acceptance and confidence. David 8 is generally programmed to cultivate a sense of calmness and security around him. 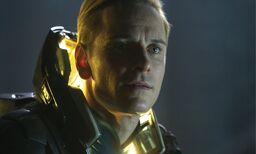 David is the only crew member not to go into stasis during their journey to LV223, during which he monitors the crew with a neuro visor, in particular Shaw.
As a synthetic David has a higher IQ and is capable of quickly deciphering hieroglyphics found at the Alien Temple and understanding the controls of the Derelict's Orrey, not only for the Holo Map but also for flight.

On their first journey they activate a Holo integrated message by David deciphering text written on a wall which explained multiple corpses in the Temple. This allowed them to understand the Terraformers and lead them into the Ampule Room, where David collects an Urn unbeknown to any of the crew.

After examining the contents he infects Holloway with a drop of the liquid that it contained. David also examines the Terraformer's Biomask in Med Bay with help from Ford and Shaw while Holloway and Vickers are there. Later talking to Weyland in stasis before he emerges, and questioned by Vickers shortly afterwards who with David are the only two aware of Weyland being aboard ship.

On the second trip to the Temple, David holds back while driving a Quad Track and sets off towards an area where a spectagraph detected a life form the night before during the storm, here he finds an underground Derelict. In the Derelict's Orrey he finds a Terraformer in stasis and the Holo Map after he accidentally activates the controls and switches on a Holo integrated message, this allowed him to understand how the controls operated.

Once David knows Shaw is also infected, he with help from Vickers and Ford puts Shaw sedated in a MedPod so they can bring her and the creature back to Earth.

When Weyland appears aboard Prometheus from hypersleep, he sets off with some of the remaining crew back to the Temple where Weyland, Ford, and Jackson a re killed by the awakened Terraformer, and David is decapitated. Shaw survives this and later uses David's decapitated head to access and control a Derelict's flight controls and set a course for a Planetoid.

David is played by Michael Fassbender aboard Prometheus.


David is decapitated by a Terraformer aboard the Derelict, because he is a synthetic he is still operative in part.

The androids' names in the Alien films follow an alphabetical pattern: in Alien it's Ash, in Aliens and Alien³ it's Bishop, in Alien Resurrection it's Call and in Prometheus it's David.

Made by VFX, with models made by Gustav Hoegen senior animatronic designer for Prometheus and team on set for David's animatronic head, the Terraformers decapitated head and a Hammerpede. Lifecast made prosthetics including a neck for David after he had been decapitated and various Engineer's prosthetics and body parts.

For David's decapitated head in the Derelict's Orrery an elaborate split screen was produced by Hammerhead Productions using a prosthetic head, body removal and tracking the actor's face onto the prosthetic head in stereo.

Further shots were produced by the company including David's linguist support whilst journeying to LV223 aboard Prometheus. A prosthetic body was used as Shaw collected David's decapitated head from the Derelict, after collecting it she carried both to one of the RT ATVs and drove towards another Derelict.

David on film was seen as human and so wore a spacesuit and helmet just like the rest of the crew as they journeyed into the Temple.

Prologue films produced Shaw's dream sequence while she was asleep in stasis for her flight, with David being the only crew member who interacted into the dreams, edited holograms for the Holotab as David communicated back with Earth.

David 8 was shown as a much improved version of the David android series produced by Weyland, viral ads made by MPC showed David arriving and being unwrapped from his sealed packaging as part of a promotional campaign, these and other ads appear on the 'Star Map' and 'Questions will be answered' promotional websites.