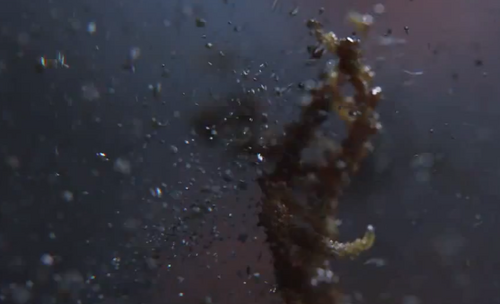 DNA is 'Deoxyribonucleic acid' a nucleic acid containing the genetic instructions used in the development and functioning of all known living organisms. The liquid in the urns had been analyzed by Weyland-Yutani and given a chemical number A0-3959x.91-15, and classified as a weapon by their scientist.

The liquid that is contained in Urns under controlled environments either on LV223 or aboard the Derelicts is quite harmless but when released and exposed in the air causes a change in the structure of life. This liquid will transform any living life form, accelerating it's decomposition and binding with a host's DNA transforming it and creating forms of life but also evolving life forms in and around the exposure increasing them in size and capability.

Used by Terraformers, a form of DNA is contained in Urns for use in starting life or changing it structure.

The Liquid from urns are exposed in the air as the crew of Prometheus enter the Ampule Room, it starts mutating worms, accelerating their evolution and causing them to grow very quickly. David becomes interested with an urn but the rest of the crew are not so interested and continue exploring.

Later Millburn and Fifield become stuck in the Temple because of a storm, choosing to stay in the Ampule Room there they are not alone, the DNA has accelerated the worms development which have increased in size. These creatures start moving about attracting Millburn and Fifield, Millburn finding them interesting moves nearer and as he does the creature jumps and wraps around Millburn's arm, Fifield assists by decapiting the creature only causing 'acid blood' splashing on him.

Later David uses a sample of DNA from an urn on Holloway, which he brought back from the Temple. This DNA not only has an effect on Holloway who starts mutating but at a slower rate but also effects Shaw who becomes pregnant. This creature is removed in a MedPod and grows rapidly left unchecked in the Escape Craft, it attacks Shaw when she goes for supplies and then a Terraformer who enters the craft. The creature now several times larger grabs and impregants the Terraformer, later bursting through the chest of the Terraformer emerges a creature, called a Deacon this creature resembles an Alien.

The DNA effects Holloway slowly and mutating worms that evolve extremely quickly, and the 'acid blood' effects Fifield by mutating him. The effect which the black liquid has on anything organic shows that the Terraformers were keeping it for terraforming but also possibly as a bio weapon which would be released reforming any life that already existed.

A quantity of this liquid from the Ampule Room escaped before and had an affect of killing all the Terraformers in the Alien Temple that the crew explored including the Derelict, this release could of killed all Terraformers on LV223 that weren't safely in stasis.

Coner O'Sullivan's team produced 10 full body cast prosthetics for the engineers, this included the Elders at the beginning of the film, as these actors didn't interact with the crew they weren't as tall as Ian Whyte , so actors Daniel James played the sacrificial engineer and Paddy O'Kane the elder. From here Weta Digital produced digital effects for the decaying sequence.

Weta CG supervisor Phillip Leonhardt generated sub surface scattering with 3D modelers creating the understructure of the vascular system which lead compositor Christophe Salzmann integrated with practical effects of the bruising effects using silicon, ink and oil. Using melting polystyrene for the decaying DNA blended with shader and model work and cloudy black particles for the decomposition of the engineer as he finally decayed along with the melt water. Underwater DNA strands can be seen reforming using particle and shader effects, depicting life reforming again.