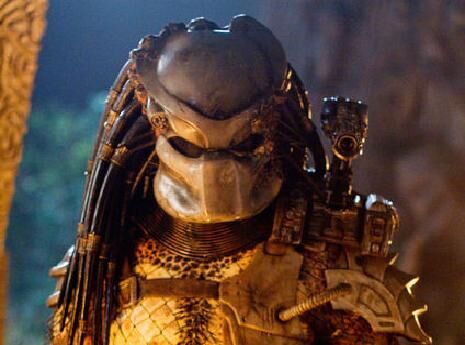 In the films Classic wears a Plasma Castor on his left shoulder and wears a smooth mask, he was a member of a Jungle Hunter clan which also included the Elders.

A hunters mask with no markings.

Predator (film)
During one of the warmer years in the Central American jungles a Predator descends in a drop pod for a hunt, a sign of proving himself as a hunter, hunting honorably up against only armed combatants. Classic first finds the group of military advisers who later Dutch's team are sent in to find, Dutch's team find the bodies strung up in trees soon after arriving but continue their mission and attack the guerrilla base and capture Anna who was held hostage. While they retreat to the drop site the Classic stalks their every move while Billy senses something Classic stays cloaked and only attacks cloaked when Anna tries to escape attacking Hawkins leaving Anna unharmed. Dutch's team split in a five meter spread searching from Hawkins body and as they do Blain is the next killed which starts a fire fight only resulting in the destruction of jungle plant life.

Later that night even though the team set up traps Blain's body is collected for the trophy by Classic. The team realize that it must be using the trees and the next day set up further traps which only results in Poncho being injured, so Dillion and Mac make chase and are killed and Classic continues hunting the rest of the group as they themselves continue to the drop site.

In a last stand after Billy fails in stopping Classic, Poncho is helped by Anna to and drop site and Dutch stays to battle against it. Finding mud balances the odds a fight between them ensues with Dutch finally striking a fatal blow but avoids killing him which allows Classic time to set the self-destruct on the wrist communicator which detonates just as Dutch escapes leveling a large part of the jungle canopy.

Predators (film)
Classic was captured by the Berserker, Tracker and Falconer, Predators in the film but was later released by Royce, he then goes on to battle aganist Berserker in the Predator Camp.

Siding with the humans, Classic was crucified as a show of strength by the Berserker, Falconer and Tracker before the group reached the camp. Released by Royce in the camp and as he did armed himself with a Plasma Castor and activated a Predator's Ship by his request setting a course to Earth with his Wrist Communicator giving Royce a chance of escaping. After Royce leaves the Berserker appears and the two battle to the death with the Classic dying in the fight.

A concept that then was carried through into the games of the film like Predators and later into AVP: Evolution who's predator character was also from a Jungle Hunter clan and in gameplay the character could be upgraded using equipment from other characters from the Alien v Predator films. 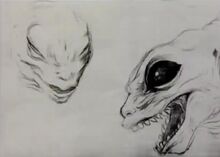 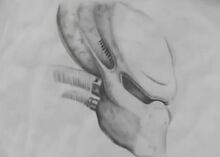 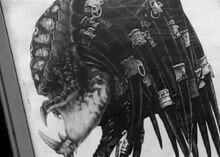 Early concepts of the creature design saw a more elongated face before Jon Silver brought in Stan Winston. On a flight to Japan with James Cameron devised a creature with rastafarian qualities, with Cameron's input on it's design Winston added mandibles giving Classic a face and not just a mask which he would wear. 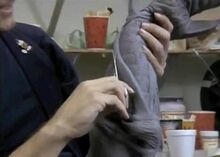 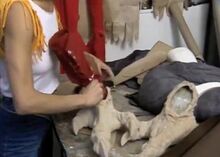 Prosthetics for the film were produced by Stan Winston School. 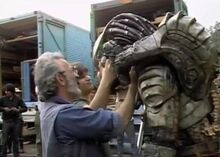 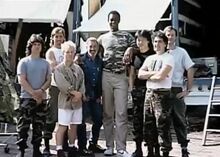 In shooting Kevin Peter Hall was chosen by Stan Winston mostly for his height, an actor that stood 7" tall and could act in a costume who also dwarfed Arnold Schwarzenegger. 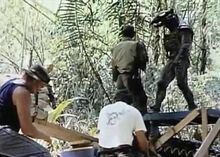 R/Greenberg Associates created the film's optical effects, including the alien's ability to become invisible and its thermal vision, its glowing blood, and electrical spark effects.

For the cloaked scenes for Classic in the film motion control was captured by Arroyo Media an actor wore a red suit in the shape of a predator which in post production was edited into a flowing and fluid form giving the appearance of being cloaked. This was preformed on the first concept and then as the design of Classic evolved was filmed again in the new costume. Joel Hynek visual effects supervisor used two different techniques in filming, for filming the cloaked predator an actor in the red suit was filmed and the background was filmed in post production, concentric in-line circles were used for the cloaking effect and the second an infrared beam splitter on the two cameras was used, one filming the actors in infrared and the other filming the background and in post production the two sequences combined showing the scene as Classic would perceive it.

Predators (film)
Classic is killed by Berserker in the film Predators.

Classic wears a Plasma Castor on his left shoulder, he was a member of a smaller group of Predators which were hunted by Predators that were referred to as super predators. 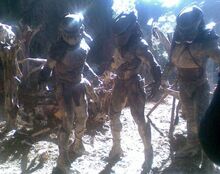 Michael Broom, Alex Toader and John Wheaton all produced designs of the predators along with Joseph C Pepe who as well as set designs draw drawing for the masks and weapons of the Super Predators and Classic.

The designs of the Classic followed through from the first two films with small adjustments to the suit design and mask which was made longer. A group of super predators called the Tracker, Berserker and Falconer had new designs in keeping with their abilities and having superior capabilities to the Classic, these also had new armour and elongated masks giving the appearance of faster and sleeker predators. 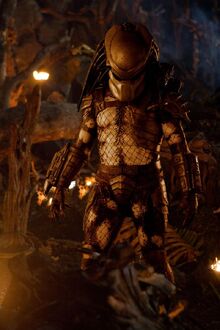 On set Carey Jones played as the Tracker, Brian Steele as the Berserker and Falconer and Derek Mears as the Classic Predator.

KNB EFX Group, Inc. had about 12 weeks to sculpt and mould all the body suits, faces, masks, armour and weapons. Supervisors Howard Berger & Greg Nicotero needed to make multiple suits for each character as they involved fight scenes and not adapted for each of these scenes. The actors would play in the roles unless it involved a fight scene were stuntmen played as the characters including the fight between the Berserker and the Classic.

With the actors already being tall the suits added a further 2-3 inches and as the spec was for fast and agile Predators, body armour was made a tight fit and masks for the characters were elongated and streamlined. Predator's dreadlocks were also streamlined and positioned facing backwards adding to their fast athletic form.

As the Berserker and Classic were the only characters who removed their face masks in the film they required a face mould and Berserker had detailed colouring about the face and mandibles were as the Tracker and the Falconer suits had holes were their faces were and masks fitted over the area.

Scenes that included the Classic, involved him being tied by rope to a monument as he stood on a step ladder out of sight while filming, he was crucified in the film as a show of strength.

In production for some action scenes and during set make-up Andrew Varenhorst played as a predator photo double and stand in. All other scenes saw the actors play as the characters with CGI by Troublemaker Digital Studios being used for the cloaked scenes and some CGI by Ubisoft Digital Arts being put in at post production like the Classic's wrist hologram were he activates and programs a course for Earth and as weapons are discharged.

AVP: Evolution
Classic also appears in AVP: Evolution as a playable character skin along with the Berserker, Falconer and Tracker.

Predators (phone)
Classic appears in the game Predators (phone), as in the film Predators, Classic has been captured and crucified in the Predator Camp and as Royce arrives in the level Hunting Camp Day releases him and gameplay is played as Classic in that level.

Predators (game)
Classic in a collectable mask in the game along with the Berserker, Tracker and Falconer.

Films
In the film Predator and Predator 2 the Classic from the Jungle Hunter clan is played by Kevin Peter Hall.

Since the films Predator/Predator 2 Classic Predator from the original Predator is seen for the first time in over 20 years.

Various
Later masks for characters like the Elders and hunter Scar from Alien v Predator (film) were based around designs of the classic mask from Predator (film) character would also have redesigned weapons and armour, this also included the film Predator 2 as the design varied and included a redesign of weapons already available for Classic and new weapons not available for Classic until later films, new body clothing and a slimmer mask added the feel of a city hunter.