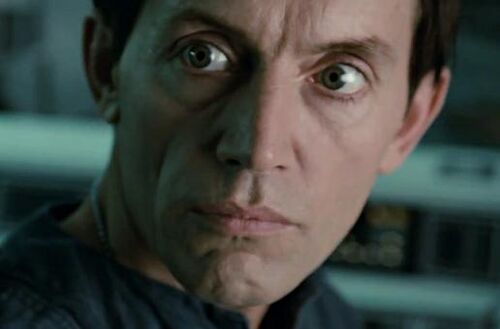 Bishop is a synthetic and executive officer aboard the USS Sulaco in Aliens (film) and Alien 3 (film). He also appears in the game Aliens: Colonial Marines, both as himself and 'Bishop' another synthetic with his appearance, also appearing is Michael Weyland and Weyland both characters with similiar appearance.

Other games based around the film Aliens also feature Bishop as well as other characters.

Unlike Ash from Alien (film) he was loyal to his seniors, colleagues and especially Ellen Ripley. Although Bishop tried to be friendly to Ellen Ripley she did not trust him until he had proved himself.

Aliens (film)
Bishop uses his skills on LV426 in Aliens (film) as a medic and tending to other support needs, later remotely piloting a UD4L Cheyenne which he uses to save Ellen Ripley, Newt and Corporal Hicks by piloting the craft to escape the exploding atmosphere processing station. On the Sulaco, Bishop is ripped in half by the Alien Queen which had attached itself to the dropship. When Ripley opens the airlock to expel the Alien Queen into space, Bishop saves himself and Newt.
Afterward, he is placed in hypersleep with Ellen Ripley, Newt, and Hicks aboard the USS Sulaco, the Stases are later ejected into the EEV in Alien 3 (film) which then lands on Fiorina 'Fury' 161 a foundry and prison planet.


Aliens: Colonial Marines
Bishop appears in the level Hope in Hadley's and on comms in others, in the last level Home Bishop helps defeat the Alien Queen. At the end the team confront Michael Weyland and try to extract information from him about what was happening and what was Weyland's mission on LV426. O'Neal dislike Michael Weyland and draws his weapon pointing it at him, Hicks intervenes and the weapon discharges killing Michael Weyland.

Various
In the Aliens Anthology interactive menu, Bishop is referred as 'Bishop. L 341-B', it also lists Bishop's duties as being a scientist, APC driver and navigate the dropship from the Sulaco by remote. Composed of a Carbon fiber skeleton with lachment points artificial musculature, powered by a 25kw hydrogen fuel cell with power for 400 days and a mind integrated carbon 60 processor, 10x15 fps operations and 1/1.2 tb ram.

The characters Bishop, Michael Weyland and Weyland all have a similiar appearance, with the synthetics modeled around the character Weyland, portrayed by Lance Henrikson, in Aliens, Alien 3 and Aliens: Colonial Marines.

Aliens (film)
Bishop in the film Aliens was a synthetic and appeared as an improved version of Ash from the film Alien. With his increased abilities he is capable of preforming a knife trick, Drake holds Hudson and Bishop puts his hand down saying "trust me" as he places a knife in-between his fingers moving it as quickly as possible.

Bishop when talking to Ripley and other crew says about himself, "It is impossible for me to harm or by omission of action allow to be harmed, a human being", in some small way a reassurance to Ripley. 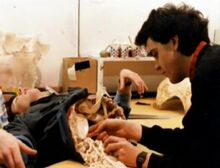 Bishop was produced and made by production crew on set from silicon, a torso and legs were produced for the filming in the cargo bay aboard the Sulaco, all other scenes the actor played as the character Bishop. 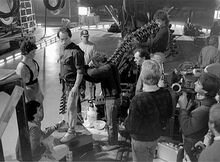 The full size Queen ran on rails with control wheels operating the arms, head and legs which were connected and controlled by cables. In the Atmosphere Processor as it appeared after it detached itself from it's sac and started chasing after Ripley, a full scale animatronic model was used before being filmed with a 1' model as it ran along the corridor towards Ripley who then entered the elevator, then cutting again to the full sized model as the Queen got in.

On the Sulaco a crane lowered the full size Queen off the Dropship, a silicon tail attached on a cable connecting to Bishop as the Queen stabbed him with her tail, before being lifted up on cables on a specially made tail rig. As the Queen tore Bishop apart a silicon animated Bishop replaced the actor, the scenes were filmed with interconnected cut scenes, Tom Woodruff Jr. and Alex Gills then throw Bishop's torn torso across the cargo bay as if the Queen pulled it apart using milk and cream to slide him across the cargo bay and represent the androids blood.

Alien 3 (film)
Bishop lands with Ripley, Newt and Hicks in the film Alien 3.

Ripley after recovering from injuries finds Bishop's damaged torso in an area of scarp, collecting this she powers up Bishop and finds the answers to the questions, as he is non-operational Ellen Ripley uses a power supply reactivating him for a short time so she could extract information regrading their EEV landing on Fiorina 'Fury' 161.

Later Michael Bishop arrives at the end of the film to extract the Queen from Ellen Ripley, Michael Bishop being similiar to Bishop the synthetic and both having a similiar appearing to Charles Bishop Weyland.

As appearing later in the Aliens: Colonial Marines game, Bishop's legs were never collected and laid were they fell in the film Aliens.

A model animatronic torso for Bishop was produced using reference to the film Aliens including the added damage from the EEV landing.

Bishop, Michael Bishop and Weyland are played and voiced by Lance Henriksen.

Bishop although called the same as the character from "Aliens" and "Alien³" is a different synthetic clone in the game. Bishop's likeness is also used for the character Weyland and Weyland's clone.

Bishop's legs appear in early concepts of Aliens: Colonial Marines and in the game in the level Distress on the Loading Bay of the USS Sulaco, where they were ripped from his body by the Alien Queen in the film Aliens.

Alien Trilogy
Bishop helps in various levels, taking control of the dropship and APC, using comms in the APC following Ripley and tracking the aliens. Although like in the film Aliens, a squad of USCMs arrive in a Dropship and APC along with Ripley and Bishop, it is though they were wiped out as they entered the alien infested Hadley's Hope buildings.

The events of the film Alien 3 are set after Aliens, Ellen Ripley having survived the detonation of the Atmosphere Processor with Bishop, Hicks and Newt escape to the USS Sulaco, only for a fire to start, causing their stasis units to be ejected into an EEV and soon after landing on Fiorina 'Fury' 161 a prison planet.

In the games LV-426 (game) and Aliens (Activision) a player takes the role of characters from the film Aliens, set at the same time as events of the film in similiar scenarios around LV426.