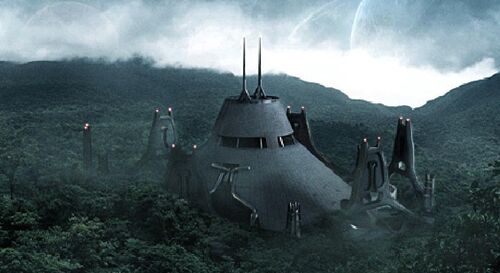 Atmosphere Processors are a Weyland-Yutani built multiply level installation and facility for terraforming colonys on planets like LV426.

In the film Aliens they were part funded by the Colonial Administration (ECA) while in the film Prometheus are only mentioned in Project Prometheus, an advertising campaign that run up with the release of the film.

Aliens (film)
The crew first entered the Atmosphere Processor after they located the colonist by way of their PDTs on the 2D tactical display.

They arrive in the APC and Sergeant Apone deploys the team while Gorman and Ripley stay monitoring them by their in-helmet cams. As they descend the three floors they notice the Alien secretions and the increase in heat, as they continue Apone is ordered to collect their firing pins and ammo leaving them with flame throwers, pistols and a shotgun. Vasquez and Drake reload with spare pins and ammo which when the fire fight starts causes a leak in the heat exchangers which are above them. As the Aliens emerge from all direction the surviving crew pull back as Ripley drives the APC nearer to their location to extract them.

Later when they set up command in Operations at Hadley's Hope, Bishop shows them that during the extraction the heat exchanger cooling systems have been damaged and are venting to the atmosphere. This requires the survivors to get the second Dropship from the Sulaco and escape. After a battle in Operations, only Ripley, Hicks, Bishop and Newt are left and they use the Dropship with seconds to spare as the Atmosphere Processor explodes behind them.


The idea and subsequent use of a atmosphere processor and buildings were pivotal for the film as the script was finished. This would find the atmosphere breathable and a location as where the aliens and colonist could be found, with the aliens and Alien Queen requiring a warm and humid environment as the storyline unravels.

Mostly designed by Ron Cobb, areas of the installation included the buildings airlocks, command, corridors, stairways, laboratories, installation's buildings, bar and casino, uplinks and Atmosphere Processor building. Ron Cobb draw on ideas of installations on a moon, for the Atmosphere buildings interior industrial oil refinery gantries, pipes and coolant supplies gave the ideas that followed through into construction, this also included gantries that were already there at the power station.

Some scenes of the Alien nest were shot at the decommissioned Acton Lane Power Station in Acton, London. The crew thought it was a perfect place for filming because of its grilled walkways and numerous corridors. Problems were encountered with rust and asbestos, leaving the crew requiring to spend money to clean the asbestos and monitor air quality through the day. The Alien nest set was not dismantled after filming but was reused in 1989 as the Axis Chemicals set for the film Batman.

The Aliens' liar was part sculpted in miniature as the marines descended towards the colonist, with the scaled set model made from polystyrene, wood and pipes which was then sprayed, filming included a motion control technique that used both model and full scale sets.

Filmed on set in three different models the Atmosphere Processor could be seen in the background of the Hadley's Hope model set this was about 7' high, a smaller scaled model of the interior featured in filming for multiple angles as a remote controlled APC was driven around it's gangways. A larger sets that included 20' high steel tubing for the cooling pipes of the reactor were constructed and were a 7' model UD4L Cheyenne Dropship was suspended on cables and pulled along as piloted by Bishop who collected Ripley and Newt in their escape before the detention.

Other full size set scenes included their descent into sub level 3 and their escape as the squad were slowly killed. Repeat use of corridors and gantries reduced costs allowing more time being spent in dressing sets and FX sequences.

Aliens Anthology
In the Aliens Anthology interactive menu, height given for the Atmosphere Processor is 1500m. Although proportionally with the size of the APC it suggests that it is nearer 200/300m tall, comparable with other versions.

Prometheus (Project Prometheus)
A proprietary system creates a localized environment in the lowest atmospheric strata by mining the surrounding air and delivering electrostatic charge to correct the chemical composition of the planetary atmosphere. The system does this by converting toxic compounds into a breathable air ratio of approximately 1:3.1 oxygen-to-nitrogen ratio, depending on a colony’s oxygen needs. Once stable equilibrium is achieved, the AP continually monitors environmental gas compositions and corrects imbalances. By-products can often be isolated and condensed for use as fuel sources, industrial cleaning supplies or raw materials for manufacturing.