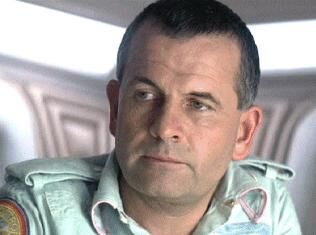 Ash is a synthetic and Science officer aboard the Nostromo in Alien (film). Portrayed by actor Ian Holm, in the film he breaks quarantine by allowing Kane a member of the crew back aboard after he has been infected by an alien life form.

It is later discovered that Ash is not human at all, as he appears, but is in fact a Hyperdyne Systems 120-A/2 android.

In the film Alien Ash malfunctioned due to a conflict between his internal programming and 'Special order 937' received from Earth.

Alien (film)
The commercial towing spaceship Nostromo is on a return trip from Thedus to Earth, hauling a refinery and twenty million tons of mineral ore, and carrying its seven-member crew in stasis. Upon receiving a transmission of unknown origin from a nearby planetoid, the ship's computer awakens the crew. Acting on standing orders from their corporate employers, the crew detaches the Nostromo from the refinery and lands on the planetoid, resulting in some damage to the ship. Captain Dallas, Executive Officer Kane, and Navigator Lambert set out to investigate the signal's source while Warrant Officer Ripley, Science Officer Ash, and Engineers Brett and Parker stay behind to monitor their progress and make repairs.

Alien (film)
The synthetic Ash is a Hyperdyne Systems 120-A/2 android, he malfunctions due to secret orders 'Bring back alien life form, Crew expendable.'
Ash's character is played by Ian Holm.
Ash is killed by Parker who decapitates him with a blow from a fire extinguisher, revealing Ash to be an android before incinerating him. Ripley re-activates Ash's decapitated head before burning him and Ash reveals the secret company's order 'Special order 937'. Ripley then varifies this with the Nostromo mainframe.


In the film Aliens, Bishop makes a reference to the synthetic Ash from the film Alien as a Hyperdyne model, suggesting that it in some way was an inferior make and any failings by Ash could near happen with a 341-B versions.

James Cameron making a reference to the Terminator film released 2 years earlier also directed by him and the Cyberdyne Systems company appearing in it.

In further interpretation and analysis of plot lines from the film including Ash's character, authors including Nicholas Mirzoeff, James H. Kavanagh and Roz Kaveney developed the characters' meaning, persona, interaction and affect integrating amongst the other characters of the film. Each focusing on different aspects and elaborating further on speculative ideas of plot undertones. 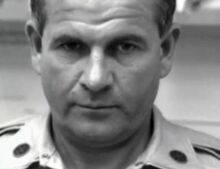 Ivor Powell associate producer along with Ridley Scott thought of the idea of a more industrial vessel for the Nostromo and 'Truckers In Space', a concept of truck drivers journeying on a long route in space, with this idea areas of the Nostromo would have a more used feel and appearance, worn, sparse and industrial which also followed though to the crew's uniforms, equipment used aboard the spacecraft and the different levels and areas. 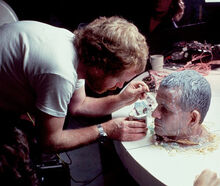 An original script for the film Alien was titled Star Beast but O'Bannon disliked this and changed it to Alien after noting the number of times that the word appeared in the script. He and Shusett liked the new script and so took it on to Walter Hill, David Giler, and Gordon Carroll, who had formed a production company called Brandywine with ties to 20th Century Fox. O'Bannon and Shusett signed a deal with Brandywine, but Hill and Giler were not satisfied with the script and made numerous rewrites and revisions to it. Hill and Giler added some substantial elements to the story, O'Bannon felt that adding the android character Ash was an unnecessary subplot but which Shusett later described as "one of the best things in the movie...That whole idea and scenario was theirs." In total Hill and Giler went through eight different drafts of the script, mostly concentrating on the character's Ash subplot but also making the dialogue more natural and trimming some sequences set on the alien planetoid. 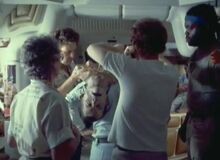 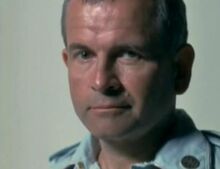 For the scene in which Ash is revealed to be an android and is decapitated, a puppet was created of the character's torso and upper body which was operated from underneath by a small puppeteer. In the following scene Ash's head is placed on a table and re-activated, for portions of this scene an animatronic head was made using a face cast of actor Ian Holm. However, the latex of the head shrank while curing and the result was not entirely convincing. So for the bulk of the scene Holm knelt under the table with his head coming up through a hole and milk, caviar, pasta, and glass marbles were used to show the android's inner workings and fluids. The scene then saw Ash incinerated by Parker and left to burn.

With the DLC maps Crew Expendable and Last Survivor for the game Alien: Isolation the characters from the film Alien reappear and some are playable in-game. These are from two scenes from the film; Crew Expendable includes finding the alien and flushing it towards the air lock and Last Survivor includes playing as Ripley and evac from the Nostromo after setting the self-destruct.

Ash's part is from Crew Expendable after the death of Kane, they set up a plan which should flush the alien into the airlock. Like in the film Parker has constructed the four flame throwers as they split into groups and search for the alien. Although unplayable Ash appears along with the rest of the crew, in the film Ash constructed a motion tracker which is used by a playable character in game.

Character detail art and modeling were provided by Jack Perry and Nic Frath, with Calum Watt adding to the character and clothing for each character. Other characters were designed by lead character artist Ranulf Busby and brought to life by lead animator Chris Southall.

Ash isn't a selectable crew member in the DLC Crew Expendable but appears along with the crew when selecting Parker, Dallas or Ripley, and plays a part in giving instructions. In game he seals one of the air shaft and gains control of the airlock allowing the alien to be ejected into space.