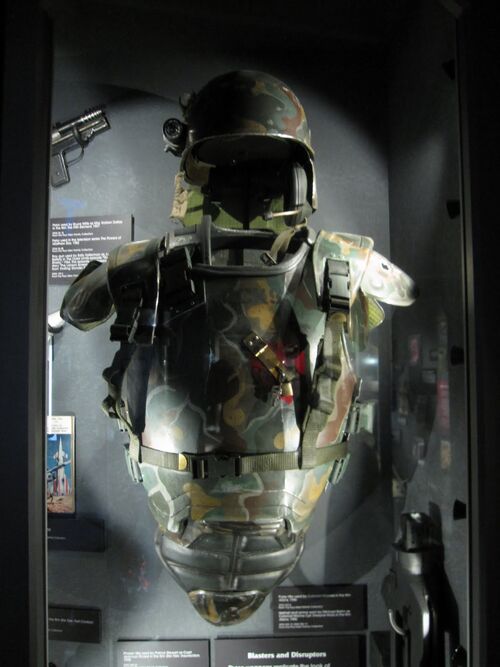 Armour is part of a Marine's armoury.

Armour is a protective covering used to prevent damage from being inflicted to an object, individual or a vehicle through use of direct contact weapons or projectiles.

Made from a synthetic alloy kevlar composite, armour is worn by USCMs and is a light body covering protecting the wearer.


James Cameron and Doug Bush allowed the actors to develop their characters by decorating their lockers and painting their guns and armour.

The armour for the film was built by English armourer Terry English, and painted using Humbrol paints. Terry English the armourer creators drew the images on to the armour from the designs drawn by the actors painting armours afterwards.

For example Vasquez's gun had the word 'Adios' and her breast plate has a line from a poem she chose which means "The risk always lives", Drake added bones which hanged from his hat and Hudson had his girlfriend's name and a skull and dagger painted on.

Cameron wanted the actors to resemble characters that were battle hardened so multiple designs were tried from different countries' armed forces, the actors would then wear the armour around set when filming testing their durability and effectiveness.

In production English armourer Terry English didn't bring the armours on set during the day of filming so was forced to quickly paint designs on unpainted armours, fortunately Cameron liked the ruff and quirky designs and so kept them in filming.

In the game Aliens: Colonial Marines, Marines are able to select between armours, helmets and attachments with varying patterns and styles, these upgrades can be collected through gameplay. Various patterns for the armours can be selected including patterns from companies promoting Aliens: Colonial Marines with others designed on Army issue. Some continuity for the DLC playable Marine characters that featured in the Aliens has been shown, these are for Hicks, Hudson, Drake and Apone who wear the same patterned uniforms and promotional images show them carrying the same weapons as in the film.