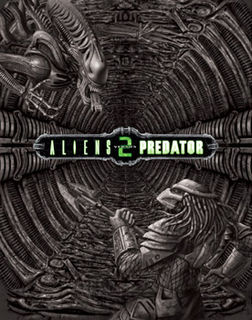 Release date for the game Aliens vs Predator 2;

Unlike the preceding game, in which the storylines of the three player characters are independent and do not affect one another, the three story lines in Aliens versus Predator 2 intersect each other. The events of each storyline trigger events in the others.
The events of the game are set fifty years after the events of the film Alien 3. Following the flight telemetry of the derelict spacecraft found on LV-426 where the Nostromo crew first encountered the Alien eggs in the film Alien, the Weyland-Yutani Corporation has discovered a planet with the ruins of an extraterrestrial civilization infested with Aliens. A planet called LV-1201 and the Weyland-Yutani research station established there, are the primary settings of the game.
The facility is supervised by Dr. Eisenberg and consists of a Primary Operations Complex and a network of five Forward Observation Pods suspended over a canyon. When the game begins Pod 5 has been destroyed, the cause of its destruction is revealed in the expansion pack Aliens versus Predator 2: Primal Hunt.

The events of Aliens versus Predator 2: Primal Hunt are set on LV-1201 the same setting as the main game but take place in earlier time periods. The stories of the Alien and Predator characters begin five hundred years before the events of Aliens versus Predator 2 and continue in the year 2230, approximately five weeks before the events of the main game, this is also the time period of for the Corporate Mercenaries' story. Primal Hunt revisits the Forward Observation Pods of the research facility and explains the destruction of Pod 5.

You can play in the following modes;
Easy
Normal
Hard
Hardcore

You can play in the following modes;
Deathmatch, Team death match, Hunt, Survivor, Overrun, and Evac.

Predator
Class for predators include Predator, Assault, Light and Heavy.

When playing as the Predator the player arrives on LV-1201 with two other Predators, and all three are soon captured by the human researchers. A former marine turned mercenary general named Rykov recognizes the player Predator as one which injured him twenty years earlier. The Predator is imprisoned for six weeks until being released through the actions of Corporal Harrison. The player must then recover the Predator's weapons and battle humans and Aliens through the research facility in pursuit of Rykov. After a climactic battle with Rykov in the Alien hive the Predator is recovered by others of his species and they pursue the Verloc into space.

When playing as the Predator the story begins five hundred years before the events of Aliens versus Predator 2. A Predator spacecraft encounters the planet LV-1201 for the first time and the player Predator is sent there to hunt. The player battles numerous creatures before discovering that Aliens also inhabit the planet. The player tracks the Aliens to their hive and activates an artifact which has the power to repel the Aliens. The game then shifts forward eight months, by which time the Predators have established a camp around the artifact. The player Predator descends into the hive in search of the Alien queen, but the artifact is deactivated and the camp is overrun by Aliens. While repairing a stasis field around a group of Alien eggs the Predator is attacked by a facehugger and the two are caught in the field and trapped in stasis for five hundred years. The Predator awakens when Dunya deactivates the artifact, and the player tracks her to the research facility's Forward Observation Pods and breaks into Pod 5, inadvertently allowing the Aliens into the pod. The player retrieves the artifact and sends a signal to other Predators who are nine weeks' distance away. The Predator is then killed by the Alien embryo bursting through his ribcage.

As the Alien character the player first takes control of a facehugger , stalking a guard through the Primary Operations Complex and implanting an Alien embryo in him. The player then controls the resulting chestburster, finding food until it grows into an adult Alien. As the Alien the player battles through the complex, releasing other Aliens which infest the facility and cause it to lose contact with Earth. The game then shifts forward six weeks, when a security failure caused by Corporal Harrison allows the Alien to access the Forward Observation Pods. The player battles through the pods killing guards and scientists, releases an Alien/Predator hybrid, and liberates a captive Alien hive. The player must disable several explosives planted throughout the hive and then pursue Dr. Eisenberg, who is bent on capturing the Alien queen. The player catches up to Eisenberg and the queen, while sabotaging Eisenberg's extraction by dropship and defeating the scientist. Eisenberg is then cocooned in the hive and revealed to be an android.

The Alien character's story also begins five hundred years before the events of Aliens versus Predator 2. The player begins by controlling a facehugger , exploring the Alien hive and Predator camp in search of a host. The facehugger attacks the Predator, but both become trapped in the stasis field. The game then shifts forward five hundred years to the chestburster emerging from the Predator inside Pod 5. The creature is an Alien/Predator hybrid, called the "Predalien" in the game, and the player controls it and searches for food until it grows into an adult. The player then battles human guards in search of the artifact, but is interrupted when Rykov destroys the pod's supports. The player must then battle several android guards in armored exosuits in order to escape the pod with other Aliens before it falls into the valley below.

Pounce, Navigate/Hunt vision modes. (Navigate for travelling in complete darkness, Hunt for seeing enemies, they will be outlined blue for marines, red for alien and green for predators).

When playing as the human character the player assumes the role of Corporal Andrew "Frosty" Harrison of the Colonial Marines, stationed aboard the spaceship USS Verloc en route to LV-1201. There has been no contact with the research facility there for six weeks and the marines are sent in to investigate. The landing goes awry and the player must battle Aliens, explore the research facility, and rescue the surviving marines. In the process the player causes a security breach which allows the Alien character access to the Forward Observation Pods, becomes temporarily imprisoned, unwittingly releases the Predator character from its cell, and battles an Alien/Predator hybrid creature. The player must then retrieve a data disk containing records of all the illegal activities taking place on the planet, regroup with his squad, battle the Alien queen, and escape the planet.

When playing as the human character the player assumes the role of Major Dunya, a female member of the Weyland-Yutani private military contractor known as the "Iron Bears" who are stationed on LV-1201. She is ordered by her superior officer General Rykov to retrieve an artifact from an area known as "Zeta Site" which houses part of an Alien hive as well as technology from an alien race (the race of the "space jockey" found by the Nostromo crew in Alien). The player battles Aliens through Zeta Site, retrieves the artifact, and returns to find that Aliens have infiltrated Pod 5. A Predator steals the artifact and the player defends the cargo area from Aliens until the pod is evacuated. Rykov then destroys the pod's supports, sending it crashing to the valley floor below.

Sierra Entertainment Inc. (formerly Sierra On-Line) was an American video-game developer and publisher founded in 1979 as On-Line Systems by Ken and Roberta Williams. Based in Fresno, California, the company was last owned by Activision, a subsidiary of Activision Blizzard. Sierra is best known today for its multiple lines of seminal graphic adventure games started in the 1980s, many of which proved influential in the history of video games. The Sierra label was absorbed by its parent company. Some franchises that were published by Sierra will be published by Activision, which also announced in 2008 that it may sell the Sierra brand.

Monolith Productions (or simply Monolith) is a Kirkland, Washington-based computer game developer. Monolith is also known for the development of the graphical game engine Lithtech, which has been used for most of their games. Between 1997 and 1999, Monolith also published games, some developed by the studio, some by third parties. Monolith's internally developed technology is currently available to be licensed to 3rd-parties through the company Touchdown Entertainment. In 2004, Monolith Productions was acquired by Warner Bros., a subsidiary of Time Warner.

Aliens vs Predator 2 Single Player Map Update 1
Installing this patch will make several changes to the single-player maps. While some saved games may be incompatible, all of the species' mission select screens will carry over correctly. Therefore it's recommended you finish a mission first before applying the update.

Aliens Versus Predator 2 v1.0.9.2 Patch
This download will update the retail version of AvP2 to v1.0.9.2. It fixes a few issues in the game and adds a handful of server list keys.

Aliens Versus Predator 2 v1.0.9.4 Patch
The v1.0.9.4 patch fixes some gameplay issues, makes some multiplayer tweaks, and adds the Queen and Exosuit to multiplayer.

Aliens Versus Predator 2 v1.0.9.5 Patch
The v1.0.9.5 patch primarily fixes multiplayer issues such as server crashes and some bugs. The patch will update any previous version, and a list of changes can be found in the changes.txt file provided after installation.