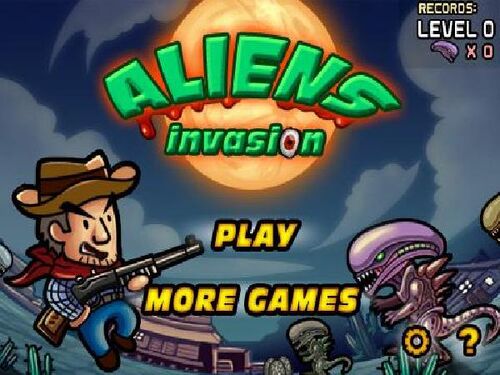 Aliens Invasion is a extraterrestrial shoot 'em up for your mobile phone.

Aliens Invasion is an incomparable fun and addictive shooting game. Wake up from your sweet dream. The aliens have invaded everywhere over the world.  As a survival, you must grasp your weapons to fight for survive.

The pistol and the axe are you only weapons at first. You can earn the money by killing  the aliens and buy the weapons in the store to exist longer. So how long will you survive?

Aliens, green, purple and gold/purple emerge from all directions, your mission is to shoot as many as you can before your bullets run out, (where you will only be left with your axe) and make it to the end of the stage. You collect pick-ups (ammo and cash) by entering buildings, and also a spot to take a short rest before continuing, these credits can then be used in the 'shop' at the end of each level. As levels progress it is essential that you purchase weapon upgrades as weapons become less effective as the aliens abilities increase.

You can play in the following modes;
Easy
Normal
Hard

iTreeGamer ltd is a developer  specializing in Games. Their unofficial profile page can be found at MobileDevHQ.

iTreeGamer ltd is a developer  specializing in Games. Their unofficial profile page can be found at MobileDevHQ.

Note that the game is only playable on multitouch supported device.