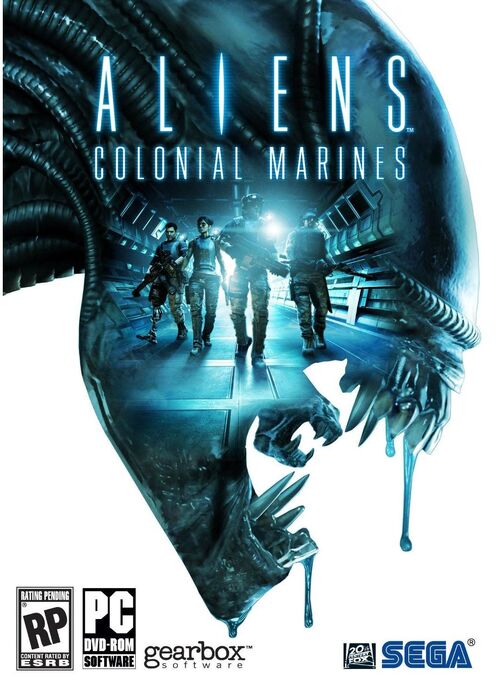 In 2179 a USCM force was despatched on board the USS Sulaco to the Hadley's Hope Colony on LV-426 to destroy a Xenomorph infestation.
All contant with the Sulaco and its crew was lost.
17 weeks later the USCM's despatched the USS Sephora with a battalion sized force and a full complement of surface bound nuclear warheads to secure the situation once and for all.

Aliens: Colonial Marines is a squad-based first-person shooter in which a player controls Winter a Colonial Marine in singleplayer and in co-op four players each with a different personality can be chosen. Each players character can carry additional weapons including a flamethrower, pulse rifle, smartgun, pistol, RPG, and many types of grenades.

As well as Gearbox Software as the main developer for the game Aliens: Colonial Marines, some development was outsourced to TimeGate Studios, Demiurge and Nerve Software. TimeGate Studios were responsible for primary development, Demiurge added networking and multiplayer options, Nerve Software designed the multiplayer maps and Darkside Game Studios designed Stasis Interrupted DLC along with Gearbox.

Aliens: Colonial Marines uses a Red Ring Unreal Engine 3 with a new renderer, developed by Gearbox and exclusive to Aliens: Colonial Marines. Gearbox President Randy Pitchford stated, "It's a real-time dynamic lighting, dynamic shadow system. When you see the images in this game you're going to realize how alive everything is. The way the lights move in the environment -- it affects everything in real-time. Nothing is baked in."

Gearbox Randy Pitchford stated, "The fiction we've developed has allowed us to bring a squad of colonial marines back to Hadley's Hope on LV-426", speaking at E3 2011.

Brian Martel chief executive officer at Gearbox Software stated, "we're most excited about having the opportunity to make sort of the sequel that we always wanted to see", speaking at E3 2011.

Brian Cozzens minister for art stated, "it's the sequel we never had" and "it's the true successor to Aliens", speaking at PAX 2011.

With the conclusion of the final DLC (Stasis Interrupted), questions about most areas have been answered; like the egg on the EEV brought there by the Legato, Hicks appearing in gameplay answered by Turk being put into the stasis by mistake after having released Hicks and how the game intersects the films; set after the film Aliens and during/after the film Alien 3 but diverging and returning to LV426 with the singleplayer campaign occuring after the film Alien 3. 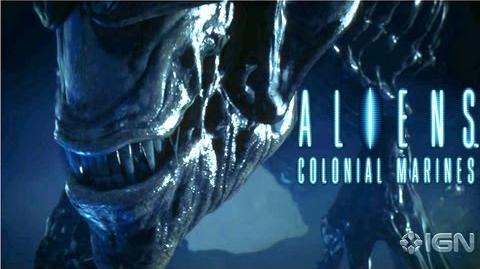 A Colonial Marine search and rescue team has been sent to investigate the USS Sulaco in search of Ellen Ripley, Corporal Dwayne Hicks, and the rest of the missing marines who were dispatched to LV426. The USS Sulaco, LV-426, and the Derelict alien spacecraft from Alien all serve as environments in the campaigns.

In a Feb 2009 press release Sega West's CEO Naoya Tsurumi said , "With the opportunity to publish what promises to be a landmark game, Sega has strategically updated the release of the other upcoming Aliens titles currently in development within its portfolio." Also adding, "By adjusting the release of our other Aliens titles to accommodate it, Sega will ensure that every title lives up to the high expectations of Aliens and AvP fans.”

During production, Randy Pitchford at Gearbox Software said about the development of the game and outsourcing, "Demiurge with us at the very beginning, helping us to explore networking and multiplayer". TimeGate, meanwhile, put in "probably about 20 or 25 percent of the total development time". Gearbox itself also chipped in 20 or 25 per cent, not including preproduction work, though Pitchford insists that, "it's not fair to take preproduction out of it".

Although the above is accurate the final largest portion of development time was by TimeGate Studios who redesigned the game, then followed by Demiurge, Gearbox Software, Nerve and Darkside Game Studios.

Meanwhile Sega was considering a lawsuit against Gearbox Software for the game's delay, although they themselves choose to develop Aliens v Predator 3 with Rebellion before Aliens: Colonial Marines, because of this and various other reasons the game needed to be redesigned so as not to fall behind the already released and graphically superior Aliens v Predator 3.

The games' development was mainly for the PC with versions for the PS3 and Xbox, both consoles were locked at 30 fps and a reduced resolution, because of this the Xbox version was the worst as this is the console with the lowest resolution. Due with time constraints for a Feb 2013 release the Wii U version was canned with little development time going into the version.

(By Joseph Leray)
May 4, 2012: On a forum for TexAgs.com, a website covering the athletics program at the Texas A&M University, a user claiming to be an ex-Gearbox employee writes that the development of “A:CM” has “been a total trainwreck.” “Gearbox isn't even making the game, except for the multiplayer,” he continues. “Primary development was outsourced to TimeGate Studios” An anonymous post on a college football forum isn’t much to go on, so no one notices. The post was later dug up by games industry supersleuth @supererogatory.

June 4, 2012: In an interview with Gearbox president Randy Pitchford, Gamasutra reports that “80 percent of the work on ‘Colonial Marines’ is being done in-house at Gearbox, with the rest being done by outside developers.”

February 11, 2013: Pitchford tells IGN that TimeGate studios worked “probably about 20 or 25 percent of the total time,” also explaining that “if you take preproduction out of it, their effort’s probably equivalent to ours.”

February 12, 2013: “Aliens: Colonial Marines” is released for the Xbox 360, PlayStation 3, and PC. At a release event in Italy, publisher Sega responds directly to the TexAgs forum post. When asked if the single-player portion of “A:CM” had been outsourced to TimeGate, Sega senior producer Matthew J. Powers told Playnews (via DSOG), “Absolutely not, the game has been developed by Gearbox Software. Other studios helped Gearbox on the production of single and multiplayer.”

February 13, 2013: An anonymous user alleging to be a Gearbox employee posts a long history of the development of “A:CM” on an “Aliens”-devoted subforum of Reddit. The post reveals that the game was codenamed “Pecan” and suggests that Sega was prepared to take Gearbox to court after numerous delays on “A:CM,” which was originally announced in 2006. Gearbox’ acquisition of “Duke Nukem’ Forever” and the development and release of “Borderlands 2” both allegedly contributed to the delays. The post corroborates the original rumor, as well: “Initially, the plan was for TimeGate to take the majority of campaign, GBX would take MP … This decision was made mostly so that most of the developers at GBX could continue working on Borderlands 2.” The post continues on to accuse the TimeGate developers of shoddy work, claiming that the “campaign didn't make much sense, the boss fights weren't implemented, PS3 was way over memory, etc.,” when Gearbox received the final build of the game. “GBX was pretty unhappy with TG's work, and some of Campaign maps were just completely redesigned from scratch,” the source writes. Later that day, another anonymous source “close to the project” told Kotaku that the Reddit post was “credible” and expanded the story further: when TimeGate signed on to the “A:CM” project, the first thing they did was, allegedly, scrap the four years of code, art, and design Gearbox had produced. When the game was returned to Gearbox, most of the staff weren’t interested in working on a game they no longer felt belonged to them, says Kotaku’s source. Even later yesterday, a fourth source -- guess whether or not he was anonymous? -- also told Rock, Paper, Shotgun that the information in the Reddit post was true. “TimeGate definitely played a much bigger role in the development of Aliens than either Gearbox or Sega is letting on,” said RPS’ source. “Aliens: Colonial Marines is essentially TimeGate’s game. From my understanding, almost all of TimeGate has been working on it for a few years.”

Aliens: Colonial Marines begins seventeen weeks after a USCM force was despatched aboard the USS Sulaco and land on LV426. In Aliens: Colonial Marines you play as Corporal Christopher Winter, who has arrived on LV-426 in the Sephora (a military vessel of the same Conestoga class as the Sulaco) with a battalion force of four hundred marines. There’s been an atomic event on the surface, the Atmospheric Processor has blown and the Sulaco has been returned around LV426 by Weyland's PMCs. Your squad of marines soon learn that Weyland-Yutani Corporation, “The Company”, has also sent in a team. They’re currently exploring a derelict alien vessel, under project code named 'Origin' near the Colony on LV426.

"Along with the serious marine-on-Alien FPS action, we can also expect some tension between the military and Weyland-Yutani", Pitchford said. “The Weyland-Yutani Corporation’s interests have diverged from the military interest. The military wants to shut down and eliminate this threat, whereas The Company hopes to capture and it, study it, and turn it into something that can be monetized. These interests become mutually exclusive."

Escape: Marines must escape through Xenomorph infested territory. Compete for the fastest time to the goal. Play with 4 on 4. Escape is a multiplayer mode where your team can either play as the Marines attempting to escape or as the Xenos trying to stop them, set with a 15 minute time limit. Marines will need to work together to unlock sealed doors and defend themselves when systems fail. Escape is an objective based gametype. As the Colonial Marines your task is to make your way through the level, accomplishing certain objectives to be able to progress to the next area. Reaching the dropship to win while Aliens try to stop them.

Extermination: Marines must wipe out Xenomorph egg clusters while the opposing team try to stop them. Compete for the highest number of egg clusters exterminated. Play a Quick Match with 5 on 5 or a Custom Match with 6 on 6. Extermination competitive multiplayer marines have 30 sec to arm nods while Aliens try to stop them. New weapons like sawed-off double barrel shotgun and a gear upgrade boost. Each game lasts ten minutes, encompassing two 5 minute sections. For the first 5 minutes you play as Marines trying to kill all the Xenos, and the second 5 minutes you play as the Xenos trying to kill the Marines. During the game if you die you respawn.

Team Deathmatch: A team of Marines against a team of Xenomorphs, first team to reach 50 kills. Two opposing teams kill enemy players to earn points. Play a Quick Match with 5 on 5 or a Custom Match with 6 on 6.

Survivor: Survive against the Xenomorphs in timed rounds. Marines must survive unrelenting Xenomorph attacks until time is up. Play with 4 on 4.

Survival: Survive against 30 levels of Xenomorphs. Marine try and last as long as possible against unrelenting Xenomorph attacks. Play with 4 on 4.


All military crew from the film Aliens left their dog tags except Ripley and Burke would didn't wear tags in the film. Dog tags from other Sephora marines also appear with 35 altogether.

A player controls one marine with the assisting marines giving support in singleplayer, in co-op other players with take the role of these characters. In gameplay the player will occasionally be required to control a particular location, using tactical positioning and turrets to fend off attacks. In Aliens: Colonial Marines players are equipped with a HUD, with the tracker being hidden and shown by holstering a weapon.

Shipwreck - Autopsy - Grief - Off the Grid