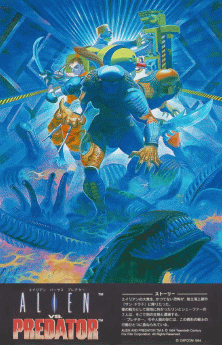 Release date for the game Alien vs. Predator: Arcade;

Alien vs. Predator is a beat'em up by Capcom on the CPS-2 for the arcade in 1994. The default cabinet for the game allowed for up to three players to play simultaneously, although some smaller cabinets only allowed 2.

This game has never been "officially" ported to any home consoles or any other systems as of today, by Capcom nor Fox, and it remains exclusively an arcade game in genuine form. A port for the Sega 32X was announced for a 1995 release but it was never published

Alien vs. Predator: Arcade introduces seven stages connected via neat mini cutscenes with four playable characters each with a combo fighting move. A straight combo streak consisting of four or five consecutive hits available for each character, an ultimate attack useful to unleash punishment on all surrounding enemies and an option to grab most adversaries. Charge movements are available to, these are very useful both to change places very swiftly and to unleash powerful attacks on multiple opponents and an upper and lower level charge attack is accessible.

You can play in the following modes;
Up to three players co-op.

Round 1 City of Despair 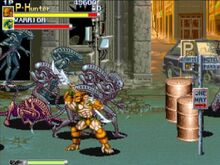 Round 2 War in the Underpass 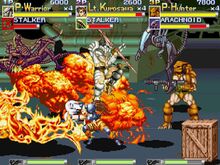 Set above ground before descending in a lift to the underground in San Drad, California. The level is made up of a building above ground and corridors underground leading into a complex with a sealed door. 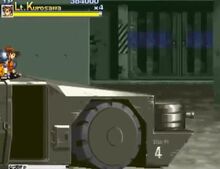 This level is played completely aboard one of the APCs in the game. The level starts in the underground complex and finishes above ground out of the city.

Round 4 Assault on a Queen 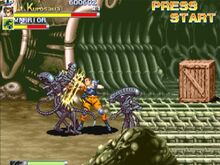 You arrive at the entrance and enter a complex of corridors and rooms that used to be an underground subway terminal. At the end of the corridors the Queen is found in her Egg Chamber surrounded by eggs and aliens. 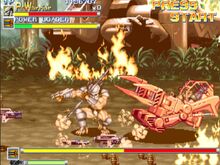 A large forested area and ancient buildings make up the level Secrets. Destroyed APCs and UD4L Dropships litter the level, a Power Loader and other marines are the enemies in the level.

Round 6 Nightmare in the Lab 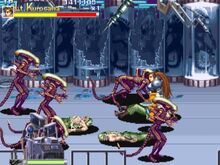 Starting aboard an APC then entering corridors similiar with Hadley's Hope before descending in a lift battling against a Control Box. Further corridors follow through the labs and rooms before ascending a lift to the surface by the Atmosphere Processor buildings.

Hunts Ends consists of the Atmosphere Processor landing bay, gantry and corridors similiar with Hadley's Hope and others in the installation. Then aboard the Military Ship and towards the bridge for a final battle.

San Drad, California has been overrun by Xenomorphs. Two soldiers were caught in the town during the initial alien outbreak and were abandoned by the rest of their team as well as their superiors, and are cornered by a swarm of xenomorph drones. Before they can be killed, two Predators appear and destroy the xenomorphs, saving the soldiers. The Predators offer an alliance with the cybernetic humans, in order to stop the Xenomorph infestation. Eventually, it is discovered that the Alien presence on Earth (and the subsequent swarm that overran San Drad) was the result of an experiment headed by an USCM colonel in conjunction with the Weyland-Yutani corporation. In the end, the Alien Hive on Earth is destroyed in a scene similar to that in the ending of the fourth Alien film Alien Resurrection - A military ship is set on a course that causes it to crash into San Drad. The story ends with the veteran Predator (Predator Warrior) breaking off his wrist blade and giving the piece to Linn and Dutch. When asked why the Predators helped, they jokingly light their Plasma Cannon sights at them with the leader saying, "They'll know." before departing into space. Indicating their hunting season is over for now.

Capcom Co., Ltd. is a Japanese developer and publisher of video games, known for creating multi-million-selling franchises such as Devil May Cry, Chaos Legion, Street Fighter, Mega Man and Resident Evil. Capcom developed and published Bionic Commando, Lost Planet and Dark void too, but they are less known. Its head office is in Chuo-ku, Osaka. Originally established in 1983, it has since become an international enterprise with branches and subsidiaries in North America, Europe, and East Asia.

Capcom Co., Ltd. is a Japanese developer and publisher of video games, known for creating multi-million-selling franchises such as Devil May Cry, Chaos Legion, Street Fighter, Mega Man and Resident Evil. Capcom developed and published Bionic Commando, Lost Planet and Dark void too, but they are less known. Its head office is in Chuo-ku, Osaka. Originally established in 1983, it has since become an international enterprise with branches and subsidiaries in North America, Europe, and East Asia.

Also a version is available on: SNES, GB, Jaguar, LYNX.