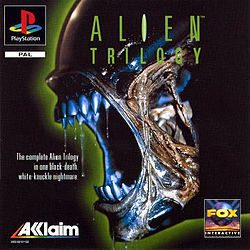 Probe Entertainment were the developers for PlayStation and Saturn game and Sculptured Software for MS-DOS game.

The beginning sequence has Bishop drive the APC in towards the north gate at Hadley's Hope installation and the USCMs enter but get attacked immediately leaving Bishop and Ripley to escape and return at a different entrance of the installation.

The ending, Ripley exits the APC and enters one of the ATV, in the distance she sees the Derelict and set off for it, completing her missions and exits the Derelict, she is then collected by Bishop in a dropship they then reach the USS Sulaco and Bishop puts Ripley in stasis and her unit is then ejected into the Narcissus.

In the role of Lieutenant Ellen Ripley, the player experiences a story loosely derived from the first three Alien films. Aside from occasional CGI cut scenes, the plot is told through text-based mission briefings that guide the player through an expanded, action-oriented story, drawing upon the settings and characters of the films rather than through the specific plots of the films themselves. The game begins in essentially the same manner as Aliens, as Ripley travels to LV426 to restore contact with the colony there. The other marines are wiped out, so Ripley must then travel through the infested colony and prison facility, and finally the derelict alien ship, to destroy the aliens and escape.

You can play in the following modes;
Single player.

0 Clear the area of any xenomorphs.

3 Power up light and secure area.

22 Clear the way to main pilots chamber. 60 seconds to rearm.

24 Through airlock to central part of ship.

28 Despatch any xenomorphs in Main Chamber.

29 Clear the area of synthetics.

31 Re-enter the main area of the ship.

33 Clear the main area of the Bone Ship, kill the Alien Queen.

Play as Lieutenant Ellen Ripley in all three film settings, rather than Warrant Officer Ellen Ripley.
Although PMCs appear in the film Alien 3, they are many more and are spread throughout the levels, this includes synthetics and military personnel.
Ripley reaches the Derelict not featured in the films Alien or Aliens.
Bishop with Ripley fly a Dropship off LV426 and are the only two that survive.

==Differences from versions== LV426 is destroyed in both Playstation and Sega Saturn Alien Trilogy games. Ripley escapes the Derelict and escapes in a Dropship piloted by Bishop. In the Sega Saturn game they then reach the Sulaco and Bishop puts Ripley in stasis and her unit is ejected into the Narcissus.

At the end of each game you are given a list of your achievements;
Aliens
Secrets
Mission

Check our Podcasts for sound comparables with modern day games and Alien Trilogy.