Alien Gods known as LV223 is a lava rock covered planet which features in the film Prometheus.


A small planet with nazca lines features on the surface, 1.0g gravity and primordial conditions, with oceans and sulphuric clouds, around a gas giant.
Prometheus lands on one of these lines in the film which where near a row of Alien Temples. These Temples contained a number of Chambers including an Ample Room where a Alien Gods' skull was found, interconnected corridors and tunnels and an array of zig-zag stairs running up through the center of the building. In the lower region of the Temple that the crew explored, contained a Spiral Room with a hole in the ground and hieroglyphics and symbols surrounding the door, this room purifies air from the outside allowing clean air to circulate around the Temple. 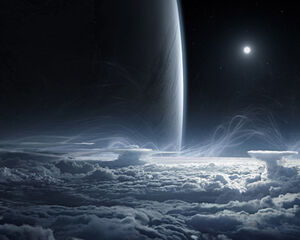 The crew used spectagraphs for analysing the atmosphere and rock structure of the Alien Temple, these signals were then send back aboard Prometheus and were displayed on a Holotab Display Unit, this visualization allowed the crew to locate any points of interest. The Spectagraphs scanned and mapped the interior of the Temple they entered leading them towards the Spiral Room and Ampule Room, the Spectagraphs then continued scanning through the night detecting a life form.

The next day David split from the group choosing to follow the detected signal, on arriving David discovered a Hibernation Room full of urns which was part of the Derelict spacecraft deep underground. Continuing along this route brought him into the Derelict's Orrery and upon activating a 'holo integrated message' David understood the controls and interacted with a Holo Map.

Prometheus (film)
In the film 'Prometheus' the Alien Gods' planet is used by the Terraformers.

Originally Prometheus was to be set on LV426 (ALIEN: Engineers).

The Alien Gods' skull was brought aboard Prometheus for analysis from inside the Temple.

Making LV223 involved the Gas giant and LV-223, the gas giant was based on a real small moon called Enceladas around Saturn that the Cassini space probe had photographed. Ridley liked the texture of it so the challenge for Charley Henley and his team was then to create a huge gas giant that encompassed the essence of this small ice moon. They looked at textures of Saturn and Jupiter for inspiration and then photographed swirls of ink to simulate giant gas flow dynamics which we combined with satellite images of earth in a big DMP. LV223 and its atmosphere was also matte painted. The brief was that the planet should have terrible weather so they based it on hurricanes on earth seen from space and added lightening flashes in compositing.

Arthur Max the production designer had built a practical foot of the Prometheus about 30' high which was photographed and scanned and modeled with the scan and textures which were added with photo projections. The size of the landing strut was used for proportion, detail and realism for the rest of the ship.

The cargo bay, airlock and one landing foot were built on the Pinewood backlot surrounded by a huge 60ft high circular green screen backed by shipping containers. The surface and walls were blended from different filming and added to the filming in Iceland for the spacecraft on the surface.

Filming from a helicopter with a stereo rig on an Eclipse camera mount taking shots of cloud in whilst on location in Iceland. These were manipulated and enhanced with DMP projections for the background and some sprite based CGI Speed FX were used to enhance the feeling of travel closer to the camera. Almost all exterior shots where digitally enhanced by combining fields of CGI pinnacles created form real rocks found in Iceland with a mountain backdrop from Wadi Rum.

The sandstorm that races along the valley was to be viewed from many angles and levels of detail. MPC FX Lead Nicola Danese referenced real sandstorms and blocked out the FX using 25-30 caches/slices generated using Scanline’s Flowline and MPC proprietary Volumetric tools to preview. Ultimately the real sandstorm reference was not violent or massive enough and there was a need to add more and more detail and play more with speed and turbulence. In the final shots the storm had escalated in complexity to 100 + separate caches, each with 136 million voxels, totaling about 13,600 Million Voxels. Rendered with PRman and enhanced with some sprite based dust passes and real elements in compositing.