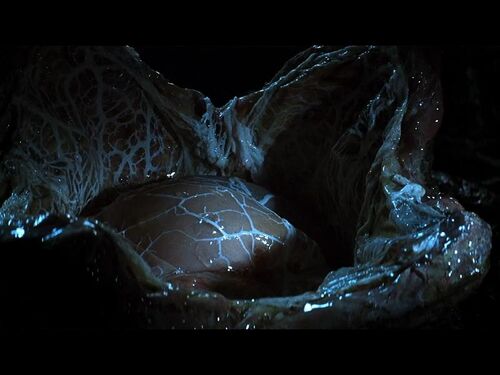 An Alien Egg is a xenomorph organism incubation cocoon.

These can be found on planets like LV426 and in Hives like the Queens' Lair and are also found on the Derelict spacecraft.

The Alien Eggs are harmless after the Face Hugger from inside has been hatched.

These Eggs are typically 64cms high and 27cms wide and are laid by the Queen who finds or uses a location with temperate climate conditions, once produced alien eggs are cared for by drones. These eggs in most cases would be produced for the arrival of new victims or the approach of suitable hosts.

Various
The interior of the original egg was the lining of a cow's stomach. In the first film, the quick shot of the facehugger erupting from the egg was completed with sheep's intestine. Initially the egg remained totally stationary save for the hydraulic movement of the lobes, however, by the film Alien Resurrection the entire egg was made to ripple as it opened.

"If you follow Dan’s original concept, the closure of the original cycle was the human host turning back into a cocoon … The Alien grabbed Harry Dean Stanton and presumably put him into a cocoon. It’s certainly no great logical detour to assume that it might have used him as another host, but I think it would be a bit odd that he turned into an egg. That’s something that would have been hard for the audience to swallow because it involved the transformation of the human host and although one can assume the Alien can metamorphose, to have its biological properties take up residence in a human being and change it, [egg-morphing] was going beyond the ground rules they set themselves." ~ James Cameron, Starburst - Problems with the egg-morphing scene and concept. 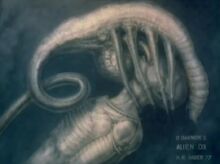 Initial test shots of the eggs were filmed using hen's eggs and this footage was used in early teaser trailers. For this reason a hen's egg was used as the primary image for the film's advertising poster and became a lasting image for the series as a whole rather than the Alien egg that actually appears in the film.

The facehugger itself was the first creature that Giger designed for the film, going through several versions in different sizes before deciding on a small creature with humanlike fingers and a long tail. Dan O'Bannon drew his own version based on Giger's design with help from Ron Cobb which became the final version. Cobb came up with the idea that the creature could have a powerful acid for blood, a characteristic that would carry over to the adult alien and would make it impossible for the crew to kill it by conventional means such as guns or explosives, since the acid would burn through the ship's hull. The design of the chestburster was inspired by Francis Bacon's 1944 painting Three Studies for Figures at the Base of a Crucifixion. Giger's original design resembled a plucked chicken, which was redesigned and refined into the final version seen onscreen. Screenwriter Dan O'Bannon credits his experiences with Crohn's disease for inspiring the chest-busting scene. 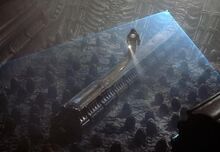 100 eggs were made for the set, with only a few being made with the extra details, this included the one that Kane examined. These eggs were set in the Egg Chamber which was part of the set of the Derelict's Orrery, redressed for the scene. The facehugger and its proboscis made from a sheep's intestine, were shot out of the egg using high-pressure air hoses. The shot was acted out and filmed in reverse, then reversed and slowed down in editing to prolong the effect and show more detail. For the scene in which the dead facehugger is examined Ridley used pieces of fish and shellfish to create its viscera.

For the filming of the chestburster scene the cast members knew that the creature would be bursting out of Hurt and had seen the chestburster puppet but they had not been told that fake blood would also be bursting out in every direction from high-pressure pumps and squibs. The scene was shot in one take using an artificial torso filled with blood and viscera with Hurt's head and arms coming up from underneath the table. The chestburster was shoved up through the torso by a puppeteer who held it on a stick. The creature then runs off-camera, an effect accomplished by cutting a slit in the table for the puppeteer's stick to go through and passing an air hose through the puppet's tail to make it whip about. 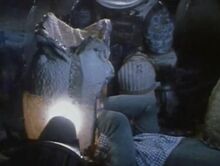 In filming eggs were controlled by hydraulics with added sound by James Shield, they were mostly made from the glass part of fiberglass with Ridley wearing gloves and operating it in a part made egg. For the interior they used cows stomachs Ian Frankman created a hydraulic powered face hugger which would be in the scene as Kane looked in, because it was so fast they slowed the scene from 1 sec to 1.5 sec.

The scene of Kane inspecting the egg was shot during post-production. A fiberglass egg was used so that actor John Hurt could shine his light on it and see movement inside, this was provided by Ridley Scott fluttering his hands inside the egg while wearing rubber gloves. The egg opened via hydraulics and the innards were made of a cow's stomach and tripe. Carlo Rambaldi also worked on the Alien from Giger's designs making some modifications in order to incorporate the moving parts which would animate the jaw and inner mouth also worked on the alien eggs and the facehuggers for the film.

Designs of the eggs followed from the film Alien, with only a few full size models made which appeared in Queen's Liar inside the Atmosphere Processor buildings. These were built by production crew with further filming completed in miniatures, controlled by puppeteers under set.

Different colour eggs were used in the full size set and the miniature Queen's egg sac, including transparent and painted paper cut outs, these would then be pulled along the Queen's ovipositor. Puppeteers controlled the Queen, ovipositor, eggs, mist and heat which was used for heat effects with further puppeteers controlling from under set. 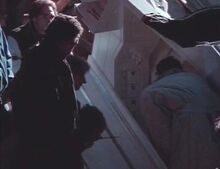 The final adaption of the draft script saw the film start with the ejection of an EEV from the Sulaco, contained inside with the crew was one alien egg which the face hugger went on and impregnated Ripley. 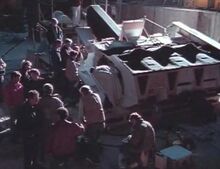 Filming of the scene involving the egg, was filmed with the 16' model EEV were the egg was located during jettison but didn't appear when Ripley returned to use her stasis' unit scanner. This was because a miniature was used for the egg and full set for Ripley. 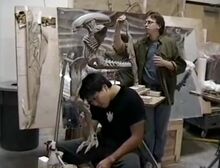 Face huggers, eggs and xhest bursters were also produced by ADI in the film. The face huggers were made from rubber while others were fully mechanical and operated by puppeteers, air bladders would give the appearance of movement, hand puppets with mechanical fingers were used for filming as they emerged from inside eggs a technique that was used in Alien. The alien eggs had 25 different mechanical movements as apposed to the 4 used before, with air bladders, cloths and sheets used in producing movement and for control. These were sculptured by Steve Wang from studioADI who would start by making clay miniatures before sculpting them in full size. 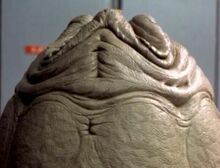 Alec Gills and Tom Woodrow Jr. with their team at ADI created a collection of small scale sculptures for Jean-Pierre Jeunet (director) who then decided which ones were to be produced into full scale. From the chosen models full scale silicon creatures, eggs and suits for Aliens were produced, the eggs being fully mechanized. 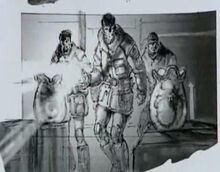 Concept artists drew concepts of pyramids based around Aztec mythology and where their gods arrived in giant spacecrafts, these ideas were carried over into the film, with the film starting in Cambodia 3000BC, as the story goes Predators arrive on Earth and battle against waves of Aliens, if they lose they activate their wrist communicator's self-destruct killing themselves and the Aliens at the same time. Richard Bridgland production designer on set was tasked with bringing these concepts to life.

Part of filming included building full size sets which the sacrificial chamber was one of them. Eggs produced by the Alien Queen were then conveyed up to the chamber and appeared in an opening on one of the seven sacrificial alters.

MPC VFX supervisor Adam Valdez was tasked with over 140 effects heavy shots that centered on the film's title characters, the alien warriors, predators, and Alien Queen. This involved using the full size Alien Queen which was only part built then using VFX to create her digitally including the Queen's ovipositor and Eggs. Once they appeared in the sacrificial chamber further VFX was used in the near shots, opening and subsequent Face Huggers emerging and attacking scenes.

Eggs didn't appear in the film as Aliens and Face Huggers were held alive aboard the Predator's Spacecraft which then escaped causing the spacecraft to land on the surface and release them into the town of Gunnison.

Like in Prometheus which had the Trilobite, Aliens v Predator: Requiem had a Predalien which could impregnate a host with multiple embryos, producing Aliens.

In an early script by Jon Spaihts called ALIEN: Engineers, featured a cargo full of Alien Eggs and Face Huggers which were both normal and white in colour including a Proto-Xenomorph (Ultra-Morph), this script was rewritten by Damon Lindelof which featured the creatures Deacon, Trilobite and Hammerpede. The Trilobite featured a resemblance with the face hugger from earlier films but would be produced straight from a host avoiding the need for eggs.


Alien Eggs appear in the book with the description of the Alien Egg from the film Alien and Aliens;

First discovered by Executive Office Gilbert Ward 'Thomas' Kane in the cargo hold of a derelict alien ship on LV-426 in 2122, this initial stage of the Xenomorph is roughly one meter in height, avoid, and leathery, with four petal-like lips at the top. Like a reptile egg, the leathery shell requires a moist environment to replenish albumen and external heat to develop properly. Resonance images taken aboard the USM Auriga showed an internal structure much like a reptiles egg: an amniotic cavity, a yolk and sac to support life, and albumen to supply hydration and shock absorption.

Besides remarking on the humid heat of the cargo hold Executive Office Kane also described a kind of field surrounding the eggs, consisting of direct light and a mist. It has been theorized that the eggs were in a kind if stasis field, dormant until triggered by a host large enough to accommodate an embryo. Uploads from Executive Office Kane's suit showed that the eggs were at least partly translucent; he described the movement of the organic life within. The Nostromo's away team did no carbon dating, so longevity speculations are questionable; however, the team noted that the alien ship seemed to have crashed or set down decades, or possibly centuries before, and at least one of the eggs was still active in 2179, when a LV-426 colonist was implanted.