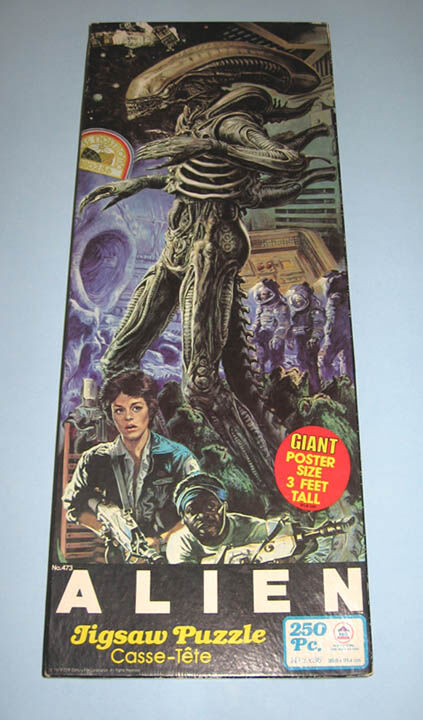 The Alien jigsaw measured 36" tall. A 250 piece jigsaw of the alien aboard the Nostromo from the film Alien.

HG Toys released five jigsaw puzzles based around the Alien theme when the film was released, they included two Alien puzzles, the Nostromo and two for the Derelict.

Prior to the release of the Film Alien and hot on the trail of the success of Star Wars, 20th Century Fox mistakingly licensed "Alien" to mass market toy companies like Kenner, before licensing executives at Fox realized that there was no way to release the film as a "PG" movie. Soon afterwards distributing to leading retail chains like Toys R' Us, Lionel Play World and Sears to the absolute horror of parents.

You can play in the following modes;
n/a

Twentieth Century Fox Film Corporation, also known as 20th Century Fox, or simply 20th or Fox is one of the six major American film studios as of 2011. Located in the Century City area of Los Angeles, just west of Beverly Hills, the studio is a subsidiary of Rupert Murdoch's News Corporation. The company was founded on May 31, 1935, as the result of the merger of Fox Film Corporation, founded by William Fox in 1915, and Twentieth Century Pictures, founded in 1933 by Darryl F. Zanuck, Joseph Schenck, Raymond Griffith and William Goetz.

HG Toys was a company known for applying licenses to their staple of role playing items, puzzles and play sets. Known for producing gun sets based on popular films in 1979 they released games to the movie Alien, and in 1980 they released Buck Rogers games amongst others.