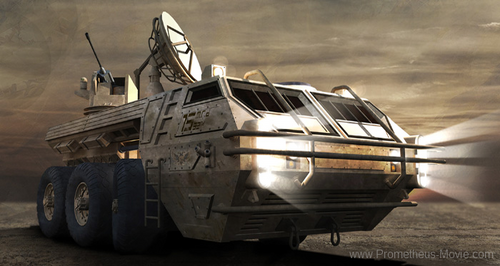 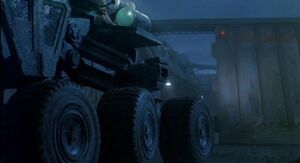 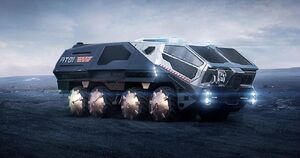 Aliens (film)
In Aliens (film), Newt's family as colonist surveyors were sent to a grid reference using an ATV where they discovered the Derelict.

Various
All-terrain vehicles are used on the surface of planets for personnel and equipment movement. The film Aliens and the game Aliens: Colonial Marines use the same ATVs with other ATVs and vehicles appearing in the game.

Prometheus (film)
In Prometheus (film) all-terrain vehicles RT01 and RT02 are used for travelling to the Alien Temple on LV223, although there are two vehicles for the crew there is a third RT RC01 which is not used.
These ATV's are capable of traversing any known terrain and has virtually no weight limit for cargo, passengers and equipment. One of our most popular and best-selling products. The RT Series Group Transport's shape-memory alloy wheel system has nano-reinforced hard-composite treads that resist temps up to 2000°F. Its ceramic gas turbine engine has 0.4 million pounds of thrust making its cargo weight virtually unlimited. With an 5.7 meter wheelbase, the personnel bay fits up to 20 occupants.

The RT01 appeared for the opening weekend of Prometheus on a special set for fans at the London Transport Museum, Covent Garden Piazza, London and stayed there for a few days. The RT02 has been on display with one of the NR6s since July 2012 until April 2013 at the Coventry Transport Museum.

Both the NR6s and RT01/02 were made in the UK for Pinewood Studios, both vehicles are drivable but were transported on low loaders to their destinations.

Multiple concepts appear in the book Prometheus: The Art of the Film, originally the ATVs were for 16 crew but this was reduced to 8, two large seats for the drivers and six seats for passengers at the back.

All 3 RT's were brought to Iceland for filming which were constructed by Trevor Wood's team from eight-wheeled Czech made, Tatra military vehicles.

James McKeown senior prop maker on Prometheus at Pinewood Studios worked on all aspects of the medical bay's MedPod (720i) and RT01 ATV's seating and interior. These vehicles were used for travel across the surface while the crew wore their spacesuits, the larger than normal seats allowed the use of larger than normal helmets and spacesuits.

In some scenes like travelling along LV223 as no green screens were used the film crew needed to rotoscope the vehicles and the actors with their transparent helmets, so CGI could be added.