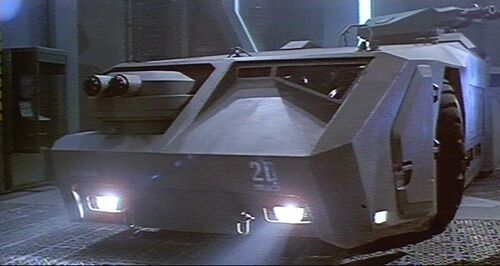 APCs model number M577 are Armoured Personnel Carrier used by U.S.C.M.s on LV426 and LV1201. These are specially designed 'APCs' for use with U.S.C.M. Dropships and U.S.C.M. UD4L Cheyenne Dropships. They are equipped with front and rear sliding gun turrets, and are able to carry up to 12 armed marines, with access via an armoured side sliding door.

Uses and designs have altered little since the final designs in the film Aliens, with the APC being used in games like Aliens v Predator and Aliens: Colonial Marines. 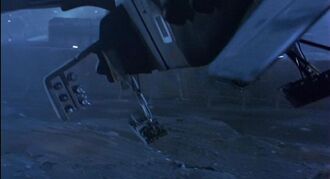 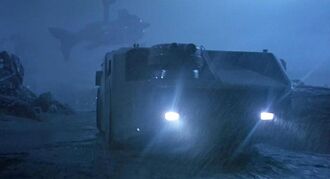 Aliens: Colonial Marines
The team use an APC in the level Hope in Hadley's arriving at Hadley's Hope installation, there they set up command in Operations and defend it from Xeno attack.

In the level No Hope in Hadley's an APC needs to be destroyed as it is defending the entrance into the Facility. Winter operates a crane and drops a container onto the APC allowing him access. Later multiple APCs appear in the game Aliens: Colonial Marines as Cruz takes the fight to the Weyland Personnel and Aliens stationed on LV426.

AVP: Evolution
An APC appears in the game AVP: Evolution in the level APC Pursuit, an Alien level were the Alien needs to escape and then finally destroy the APC.

Various
M577 Armoured Personnel Carriers are used for troop transport on the surface of planets. Used in Aliens v Predator 2 with a none movable gun turret, the gun turret in Aliens (film) slides to the rear of the APC when required, like entering confined areas at Hadley's Hope on LV426.

AVP: Evolution
APCs appear in gameplay in multiple levels for both the Aliens and Predators.

Aliens: Infestation
One APC is used by Fox-six as they complete their tasks at the UPP Compound and journey across the surface to the Derelict, battling aliens as they go.

In the level Hope in Hadley's a marines' APC is attacked by a Xeno Crusher as Winter and O'Neal make it for the landing pad were Reid is waiting. Once there the Dropship needs to be defended and it's fuel lines disconnected before it's able to take off.

A number of static APCs appear in a number of multiplayer maps like Processor, Last Hope and Overrun.

APCs that appear in the game hold a similarity with Ron Cobb's concepts for the film Aliens, designed more streamline and aerodynamic with similiar layout and armament.

Aliens (film)
A number of scaled miniature and models of the APC were used in production including a full scale APC, with Brit model makers building the one fifth scale APCs.

Syd Mead for the film Aliens designed the initial concepts for the APCs. These were designed to be integral to the design of the dropship which later would be redesigned with a more streamline and aerodynamic design by Ron Cobb, these would have a similiar layout and armament but differed from those appearing in the final film due to budget constraints. An aircraft tug tractor was chosen as the vehicle that could most fit the design wanted.

Using the more streamline APC James Cameron and Peter Lamont found that British Airways were re-equipping several of its aircraft tug tractors, and the crew managed to purchase a 635 hp Hunslet ATT 77 tug to use as the armored personnel carrier. It initially weighed 60 tonnes and although the crew removed all of lead ballast the power station floor had to be reinforced to support the weight.

The APC was a converted airways towing tug by a slough company brought from BA, after the lead was cut from the tug a small interior area was built so as a few people could fit inside in addition a sliding door was added. Even with the reduced weight and it's 6' tyres, areas of the film set, a power station in London needed to be reinforced so as to be able to support the load of the 35 ton vehicle. This area was used for filming of the Atmosphere Processor, APC and Dropship with other filming at Pinewood.

A fifth scaled model remote controlled miniature was filmed driving along the surface of LV426 and at the Atmosphere Processor. A one tenth scale APC model was filmed inside the dropship just as the UD4L Cheyenne was approaching and touching down at Hadley's Hope and loading the APC in the loading bay driving onto a UD4L Cheyenne. The 7' long model of the dropship would be guided and controlled by cables with a 2' held by smaller cables, on the surface with this scene and some others, a variation of miniatures were used for filming adding depth and scale.

Filming of the interior occurred on set for both crew seating and as Gorman and Burke sat at the tactical combat console, the internal area was far too small to film so cut sequences were used making it appear as if the crew all just stepped off the APC. A combat scene as the survivors made their escape from the Atmosphere buildings involved the use of multiple cut scenes filming Hicks with his shotgun and the alien warrior. Filming also included filming the door opening from acute angles so as not giving away the small compartment.

In filming with the crew the full size APC was used at the entrance as the squad first enter the installation and as Ripley takes the APC collecting the surviving crew. Here filming the Alien and the crew entering, as they run down the Aliens, production crew used silicon models which could be positioned in set ways that no cables or controls would be necessary these could then be exploded for effect.

Because the full size 10m APC was quite slow, filming was at 20 frames a second and then speeded up on the one fifth scaled model filming on the surface and at the Atmosphere Processor was slowed.

The APC first appeared in the film Aliens and since then appears in various Aliens and Aliens v Predator games.