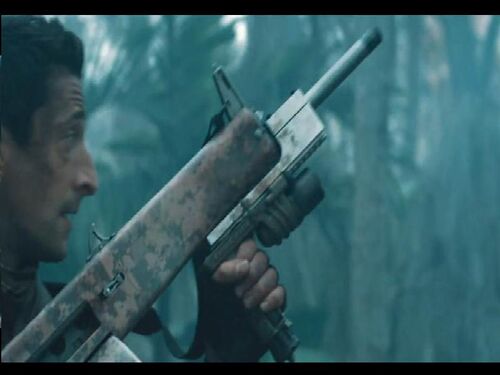 The AA-12 is a Atchisson Auto-Assault Shotgun.

AA-12s have a selective fire, operating as a semi-automatic, or in fully automatic mode at 300 rounds per minute. They are fed from either an 8-shell box magazine, or a 20 or 32 shell drum magazine.

A combat weapon used in Predators/Predators Lite and the film Predators.

Made from alloy and standard issue, a drum magazine and grip sits underneath, with standard sights to the front.

AA-12s can use different types of 3" 12 gauge ammunition such as buckshot, slugs, or less-than-lethal rubber stun batons. Like most 12 gauge shotguns it can also fire flares or special Frag-12 19 mm fin-stabilized HE, HEAP, and sensor fused HEAB "air-burst" fragmentation shells that can detonate in mid-air.

Predators (film)
Used by Royce in the film, he is selectively able to switch between standard 12 gauge rounds and special Frag-12 19 mm fin-stabilized HE rounds.

Predators/Predators Lite
Similiar to the film Royce is the only character that uses the AA-12.

Various
The AA-12 in Predators/Predators Lite, Predators™ (phone) and Predators (film) is used by Royce.

This AA-12 is camouflaged and fitted with a Surefire M900 weaponlight foregrip, a 32 round drum feed, 12 gauge slugs and effective up to 15m.

Predators (phone)
The AA12 Shotgun in the game can also fire as a Plasma Bolt, Assault Rifle, Flame thrower and Rocket Launcher.